Brazil striker Alexandre Pato dream of playing in the upcoming World Cup which knocking at the door. According to reports the Brazil Forward desperate to get chance in the forthcoming championship.

Actually, the front man last played four years before for the national team. Then he joined in the relatively less competitive Chinese Super League. However, the Brazilian Alexandre Pato very hopeful to play for Brazil and for that he see the dream of playing in the World Cup. And the striker desperate to get the coach’s attention to get chance in the competition and to come true his goal. 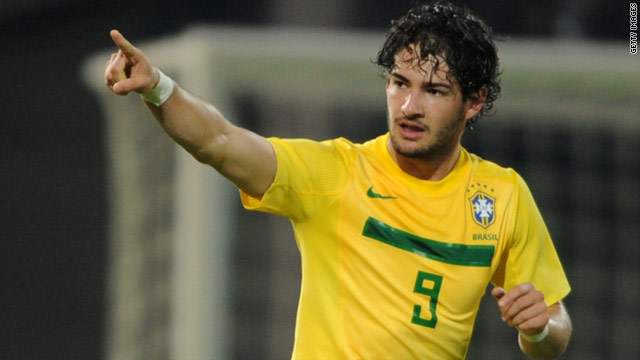 Since October 2013, Pato did not play for the national team. But the 28-year-old player is trying hard and soul to participate in most biggest football tournament which going to be held in June-July this year.
In the last edition of Chinese Super League, Pato played a great role in Tianjin Quanjian FC. He scored 15 goals in 24 matches so far. The off-spinner’s attackers are expected to catch eye of the Brazilian coach Tite with his fantastic performance.

In a statement the forward mentioned that he had worked hard all year long in thinking about getting amenities in the Brazilian team. He also added that he had always tried to return to the Brazil team and the 28 years old man also accused with his opinion.

However, the striker vocalized that he played a great championship, he cooperated to bring the team to another level, which is beyond all expectations.

The forward think there is still a lot of time left in the World Cup, he has to work hard and concentrate on his work in China. If the striker get this opportunity, he would be very happy. The man desperately told that he will work hard to return to the Brazilian national team team in the WC competition and he thinks it’s his focus now to get back his Place in the old team.

The forward have spent a wonderful year. Actually the forward wants the opportunity which get Jill, Tardelli, Renato. Paulinho has also got the chance while playing in China. That is different, now he has gone to Barcelona the biggest club.

On the other hand centre back Jill, Forward Diego Tardelli and Renato Augusto who played for the Chinese club did not go out of the plan of Tite. And 30-year-old Paulino is going to join Barcelona and play very well. These names are giving confidence to Pato, who are confident of returning to Brazil.