Brazil will face host Russia in Moscow before World Cup which going to start in June. According to reports the two football team will play a friendlies ahead of the 2018 World Cup.

However, the hosts have not yet decided on the venue for the friendly match which going to be placed on 23rd March in the next year, as the Brazilian Football Federation said.

Brazil became the first team to confirm the participation in the main championship. After the selection of the South American region the five time champions became the top of the points table and wrote down their name in the upcoming biggest competition. 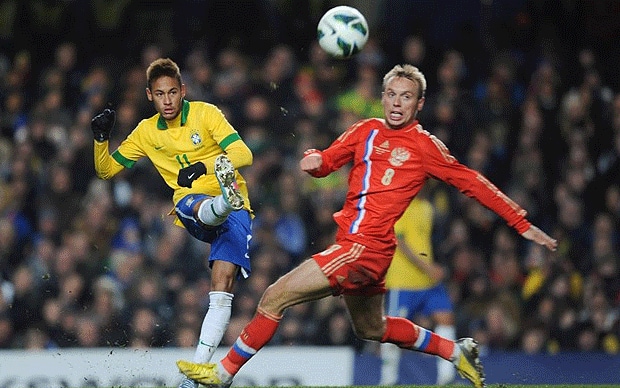 Brazil has been in excellent rhythm since the new coach Tite join the the coaching side. It was September in last year when the new boss join the side. Since then, the team did not lose any competitive match. And their present from too fantastic.

Brazil going to face Japan, England and Germany as part the of WC tournament preparations. Tite’s team will play against Japan on 10th November in Lele. Four days later, Tite’s team will face England in Wembley.

However, team Brazil fixed their squad for the upcoming preparation matches. Douglas Costa returned to the Brazil squad after being out of four matches from the World Cup qualifier. The Juventus midfielder, who was injured has been included in the friendly match against Japan and England in November,

Not only that the Coach has already selected Alex Sandro of Juventus in place of Atletico Madrid’s defender Phillips Lewis.

Costa did not get a chance in the last four games in the WC qualifier who picked up the in the Uv Santos from Bayern Munich. Tite gave him another chance to make it to the World Cup by including in the squad.

Actually the coach fascinated for the performance of the 27-year-old winger’s recent performance. He mentioned that they had earlier selected him at a time when he had physical problems. As a result, he did not get the opportunity to perform better. He has returned to his natural game in the match against Torino and Spartinga. That’s the reason why the boss included his name in the squad. Here the full squad in below.