Finally Borussia Dortmund are agreeing to sell their midfielder Henrikh Mkhitaryan to Manchester United for £30.8 million clause. It is the Dortmund club who had rejected United £19 million offer. After that they offered of £30.8 million release clause to Man Utd.

Dortmund Chief Executive Officer Hans-Joachim Watzke was strongly neglected Mourinho’s bidding offer and make sure that Mkhitaryan would remain in the side but  Henrikh agent, Mino Raiola, strongly confirmed about the move of the winger. 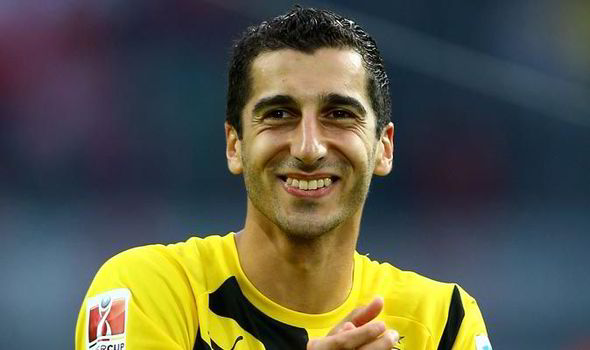 Mkhitaryan’s self wish to jump into Old Trafford this summer but the restriction of his parent club stop his foot to move the Red Devils side. He had already denied to sign a new contract deal with Borussia Dortmund. His target is set for Manchester United after ending four years contract with Dortmund this summer.

Though it is true the Borussia badly needed some well experience player like Mkhitaryan, they agreed to sell the attacking midfielder. Likely they gave the the priority of the midfielder intention.

United new signing coach of Jose Mourinho desperate to reset the full formation of the squad and players line up. After pened on paper he completed a huge of deal with some extraordinary players from different side. To borrow them in his own side he has thrown of many lucrative offer to them. Some are accomplished and some are still pending.

The coach not only borrow the legends, he also kicked out some unnecessary players from the squad. If we calculate in average the most transfer club of the year, we will find the one name who consider the most movement this summer and that is none other than the Manchester United.

According to the report along with the United side, Arsenal are also shown their tight interest to borrow the Armenian attacking midfielder. They also want to sign him in their own side. But the fact is that as the midfielder’s own interest in Old Trafford side, he should move on the United club. According to report Mourinho’s team is very close to sign the big winger on their side. If everything goes by plan this season Mkhitaryan will seemed to play in Man Utd,

According to source Kolo Toure already signed for Mourinho and he will be seemed to play for the club instead of his parent club Liverpool. The searching for outstanding performer yet not stopped. Mourinho mentioned that he would continue the process till last. To know the more details stay with us.