Chelsea battle with Arsenal for Sofiane Boufal to snatch their side. According to report the both clubs are conflicted to sign the Spanish midfielder. The release clause for the midfielder set around €25 million for the summer transfer.

The Frenchmen left the Rangers in last January and joined Lille for €4 million bid only. Within one year he became the most familiar soccer for his young talent. His ball controlling style and fast passing refers fabulas to all. On field his concentrate only ball and nobody can move his focus from that. His ability at the young age is too good. His capacity has been monitored by a huge number of English clubs and they are all desperate to sign the 22 years man in their own side. 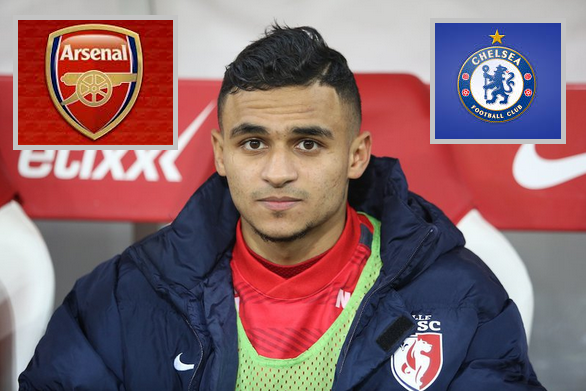 Last season he shown a eye catching performance with 11 scored in his first full top-flight season. He was also awarded as the Best African Player in Ligue 1 competition.

According to source there are several leading club like Barcelona, Manchester United, Manchester City, Arsenal along with Liverpool and Tottenham also interest to include him in the side.

Boufal agent confirmed on Saturday that the Frenchman would not join in Barca side. He mentioned that though the Barce shown their interest to pocket Boufal but the there bench policy could finish the young star’s career so far. that he has also held talks with teams in Spain. As all know about the Barca thrice strength Lionel Messi, Luis Suarez and Neymar, whose are regular in any competition. So, it’s simple Sofiane would not chance to play regular and it is also difficult to express the exceptional talent of the midfielder.

The agent also mentioned that they had also initiated discussions with three more other clubs which are the shown interest to Boufal but they the coach of the club are processing to change or busy with the national side in Euro championship. He also termed that the transfer windows of 20 and 25 million euros will take atleast two weeks to resolve.

Liverpool and Tottenham also out of the list of moving the midfielder. Now the race between Arsenal And Chelsea is on. Chelsea is interest to pick up the the Frenchman but the fact is that the new manager of the club currently busy at Euro championship with his national team Italy.

On the other hand Arsenal who have showing an interest to borrow the midfielder since January. Let’s see who will win the race. To get update linked with us.