Injury has been the woe for the Chelsea skipper John Terry this season. The Blues’ captain has struggled with number of injuries this season. The woe continues as the former England international is expected to be out of the pitch for more than two weeks.

The former England skipper has picked up a gluteus problem which was revealed by the Chelsea manager Antonio Conte in the pre-match press conference. The Italian couldn’t confirm though, excatly when the 35 years old got injured. So it’s not certain if the defender suffered the injury during a match with the Under-23s or while training.

Terry, who will turn 36 in the December, has missed most number of games this season. He has made the start just once after his recovering from an ankle injury and that too was in Chelsea’s EFL cup defeat at the London Olympic Stadium against West Ham back in October. Terry has been forced to be absent for the majority of the campaign due to injuries. 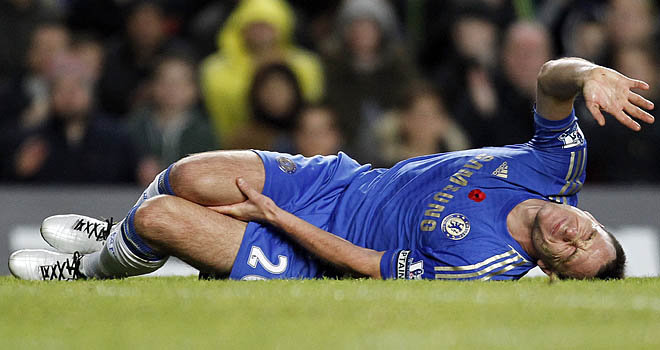 Chelsea’s new Italian manager Conte has switched up to the 3-4-3 formation & the defence trio Cesar Azpilicueta, Gary Cahill and David Luiz have settled themselves very well in the new system. The London based club has won six consecutive premiere league as well as kept clean sheets in every single one. Thus The Blues still didn’t actually miss the absence of their champion defender.

The four time Premiere League champion still remains Chelsea’s talisman, but Conte’s side is flying high in the top division of English football, thus losing the centre-back for a few more weeks won’t be that much damaging for the club.

Chelsea is currently the table topper of the Premiere League after getting 28 points from the first 12 games & 1 point ahead of Man City & Liverpool. Last season The Blues finished 10th in the EPL table & this season they’re firmly determined to finish on a high & looking for their 5th EPL title under the former Italy National Team manager.

John Terry is already a Chelsea legend as it’s his 19th season for The Blues. Terry got his debut in 1998-99 season for Chelsea and since then has taken part in 636 official games so far for them. Terry scored 56 times for them & helped them winning 4 premiere league titles & 1 UEFA Champions League title. This season he has only appeared in 7 matches for his loving clubs & the Chelsea fans must be eager to see their club legend back in action soon.