Chelsea boss Antonio Conte is preparing for his next move to Brazilian wonder kid Thiago Maia who is currently playing for Brazilian professional club Santos. He is the current prime target of Conte but unfortunately he did not able to recruit in last summer transfer window which has just finished in 31st August, 2016. But also Conte does not want to give up. Still now, the boss of the Blues wants to bring him at the Stamford Bridge and he wants to complete this transfer in next January, 2017 when winter transfer window would be available. However, Maia has currently under contracted with the Santos and the Brazilian side yet not want to let him leave in this season where their current season will end in next December, 2016. 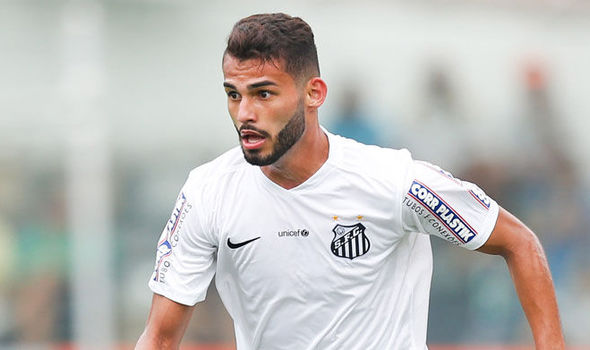 Besides, according to the report, Brazilian club and the Blues discussed over the transfer of the Brazilian international earlier but Maia was unwilling to leave the Vila Belmiro at the middle of the domestic season. So, the movement was incomplete but also Santos lost one key player this summer who was Gabriel left to Italian side Inter Milan and so, they did not want to lose another prime player this summer. However, Maia has still three years contract left with the Vila Belmiro which will last till 2019 and also they did not want to leave their player Gabriel and they tried to keep him but failed.

On the other side, the Premier League side want to secure their another transfer and they want a defensive midfielder and their choice is Thiago Maia. They are also preparing to table a bid for the wonder kid which would be approximately £15million and they will place the bid just in time when the domestic campaign of Brazil will over in December.

19 years old Thiago Maia is considered as one of the most talented playmaker in Brazil for last two years and also played with the Brazil under 23 team in Rio Olympic 2016 and helped the team to win the gold medal for the first time.

Santos has already suffered for their former player Gabriel despite being the key playmaker Maia in their squad. They lost three matches out of their last four. So, they did not want to take any risk by selling their another key player. On the other side, Conte thinks that if the Brazilian is just a teenager but he is ready to play with the Blues. So, Chelsea will make a move for this starlet.