Luis Muriel who is a prime striker of Colombian national team and currently playing for the Italian club Sampdoria and currently he has become the headline. However, he is often compared with the Brazilian great Ronaldo and so, he is known as new Ronaldo. Now, he is on the spotlight and on the radar of new Chelsea boss Conte. he is planning to spend a large amount to land this 25 years old striker and to ensure to so it, Conte is ready to wait until next summer. Though, he is a little busy for upcoming winter transfer window and was hoping to collect him but it would not possible though.

Some Italian news portal already claims that Conte is ready to give £24 million to bring him at the Stamford Bridge. Basically, Conte always wants to bolster their defensive line up but in the meantime, this Colombian star has proven himself  and through him, Conte is watching Chelsea’s future. So, he has shifted his mind to him instead. Besides, this 25 years old has already scored six goals along with five assist in ongoing Serie A campaign. 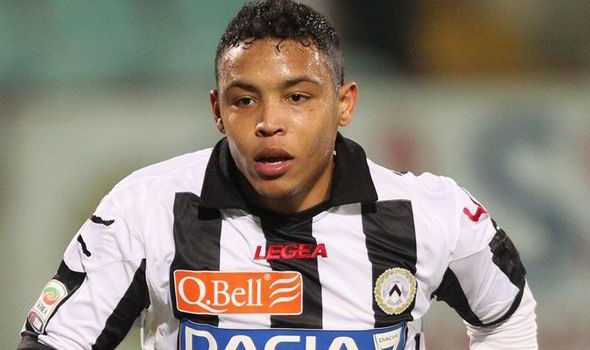 Luis Muriel who has started his professional career with Deportivo Cali where he made only 11 appearances. Later on, he moved to the Udinese where he stayed only five seasons and played 57 matches and netted 15 goals. While under contracted with them. he spent two loan season with Granada and Lecce. In 22nd January, 2015, Udinese sold him to Sampdoria  for €12 million by making almost five years agreement. His current deal will expire in 30th June, 2019. According to his current valuation, Chelsea boss Conte wants to spend more to ensure his landing. However, he became famous to show his amazing skills which almost similar with Brazilian legend Ronaldo.

Earlier Chelsea boss wanted to launch a bid which cost almost £13.5 million but later Conte understand that he will cost more than £20 million. Besides, Colombian striker was putted a release clause which approximately £24 million which have to meet by Chelsea.

So, buy him would be a wise decision for the Blues coach Antonio Conte.