Senegalese international footballer Kalidou Koulibaly has become a renowned defender within very short time. He plays as a centre back. 25 years old Kalidou Koulibaly is totally played for Senegal national football team 6 times. He debuted his career with Senegal in 5th September, 2015 against Namibia with victory. He will play for the Blues in upcoming season which is confirmed by Chelsea boss Antonio Conte.

He is currently playing for the Italian club Napoli with a five years deal. The deal was made in 2nd July, 2014 where the fee was set £5.25 million. He has played for them two season where he made 81 appearances. After playing two tremendous season in Napoli, he was attracted by many clubs. Specially English giants Chelsea and Arsenal were fall in battle to recruit him. 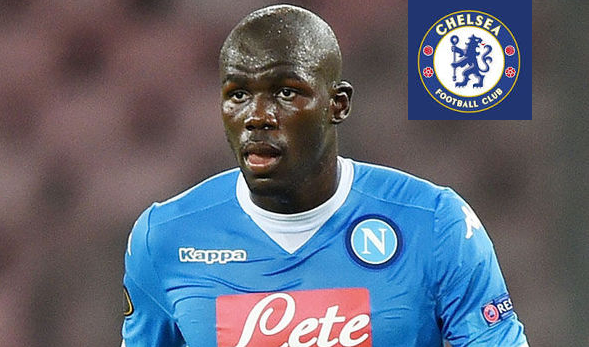 On the other hand, Napoli have failed to make a new agreement where Chelsea boss Conte has took the chance and offer him £30 million. However, the Gunners were also ready to tie him but Chelsea has taken the chance first. Antonio Conte who is the boss of the Blues, wanted this 25 years old super fast defender to rebuild his team’s back strong because they suffered a lot last season for it. This Senegalese centre back will be the best addition in his squad.

Born in France, Kalidou Koulibaly is 6 feet 5 inch tall and for that height he would play faster football than others. He has remarkable versatility and passing ability. So, he is wanted so much.

Till now he totally played for three club where he was first tied with Metz where he stayed 2010 to 2012. He played 41 appearance there. Belgian club Racing Genk was his 2nd club and Napoli was his third. He transferred to napoli and wanted to stay there but failed to do a further agreement, he decided to leave. While playing in Napoli, he picked 13 yellow cards so far.

Now, this young Senegalese footballer has made his decision to leave Napoli and heading for Chelsea where he can finally start his new career.

Chelsea boss Antonio Conte believes that he would be a great player someday if he will be guided properly. Conte is very happy to have him in Stamford Bridge for upcoming season.

Kalidou Koulibaly played for French under 20 football team but did not get chance in France national football team. So, in the mid of 2015, he changed federations and participate in Senegal international team.