England all-rounder Chris Woakes has been ruled out of the ICC Champions Trophy. He is out with a side strain and will miss the remainder of this big tournament. It is a very big blow for the hosts as the Warwickshire seamer has been consistent in the international arena in limited over cricket. He bowled two overs before leaving the field and conceded only four runs. He started the tournament with a maiden over to Tamim Iqbal but then only just managed to bowl only one over. 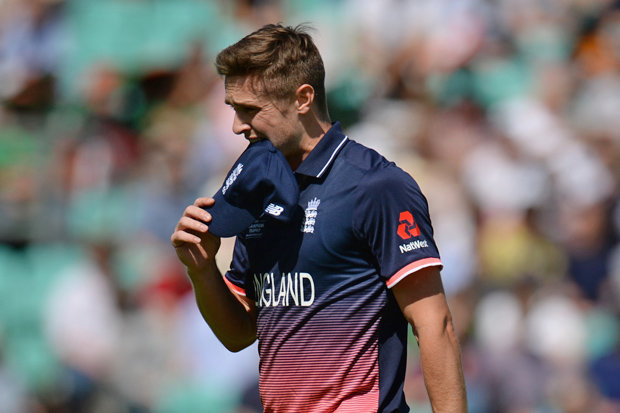 The Kolkata Knight Riders man was rested in the last two ODI against South Africa because of the injury and England expected him to be fully fit in this grand tournament. He was fit before the opening game of the tournament, was named in the playing line up, was given the new ball in hand. The former Sydney Thunder cricketer got his debut against Australia in 2011 and has taken 89 wickets in his 63 ODIs for England national team since then. He helped Birmingham Bears winning the Natwest T20 Blast in 2014 with his all-round performance. England will name a replacement of him soon. The likes of Steven Finn and Toby Roland Jones are the favourite contenders to replace Woakes. Roland Jones recently got his debut against South Africa in the 3rd ODI.

Despite Woakes injury, the English bowlers did a brilliant job at the death. They stopped Bangladesh from reaching a massive total after a blistering start. Tamim Iqbal reached his century and Mushfiqur Rahim got a half century but Liam Plunkett took 4 for 59 in his 10 overs and Bangladesh could only manage 305 in their 50 overs. Jake Ball proved to be expensive as he gave more than 80 runs in his 10 overs and it was the 3rd time the Nottinghamshire Pacer gave more than 80 runs in a One Day International game.

Surrey Opener Jason Roy’s bad time didn’t come to an end. He went for just 1 as Mustafizur grabbed a stunner at short fine leg. But another opener Alex Hales scored a quickfire 95 before getting out. But England’s main weapon Joe Root scored an unbeaten century which was his 10th in the international 50 overs cricket and captain Eoin Morgan too got his individual fifty and the duo propel England home. The hosts started their campaign with 8 wickets victory. They will face the Kiwis in their next game on June 6. An experienced player like Woakes will be certainly missed very much.