The 1970 WC winner, Brazil team is considered the best team in the world. They have the prefix of winning the World Cup in five separate continents. This time tite tour to win the WC trophy.

Philippe Coutinho, as an attacking midfielder, at number one on the list of the favorite Second Strikers On The Flanks His teammate’s elaborate ball supply of the ball to the teammates. He is a deadly combo of dribbling ability, speed and sharpness. He has the great ability to change the game. 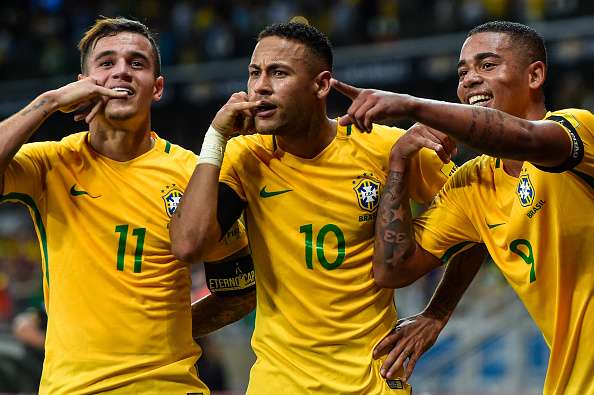 The one more game changer is Gabriel Jesus. Young footballer like him is the greatest asset of any team. He can play different types of attacking position. Although he is used mostly in the center forwards, he is a fine striker. Fools Nine, Winger, Attacking Midfielder He is fit in all rallies. Actually speed, technical skill, dribbling ability, performance, game finishing everything is perfect.

The former captain Thiago Silva is another asset of Brazil team. The defensive player have not made so much mistake, he does not have any kind of misunderstanding. He is one of the fastest defender footballers in European club football. As well as the skills and intelligence of the Ariel Ball, he is ranked number one in the list of everyone’s favorite. The guy have also ability to take the team in the final position.

Neymar, who is not included in the list of Brazilian bookmakers, is incomplete. Although there should be a lot of injury, the uncertainty of the game, he is the original Cord attack of Brazil. Straight on the feet of Neymar in Bengal, the water in the eyes of the opponent. Neymar is not just a positive striker, the winger, attacking midfielder also has the same success. Neymar’s list of more quality includes his dual match readings, passing, finishing, dribbling and diversity of the game.

All of them make a strong squad and they going together to won the trophy. This time Tite’s team in the full of motion and their target is too grab the title. They are the most favorite of the tournament.