At the last moment of the transfer deadline, Chilean defender Cristian Cuevas who moved to the Chelsea in 23rd July, 2013 has successfully completed his loan move to the Belgian professional football club Sint Truiden. He already spent his last season with the Belgian club and so, it will be his second term loan period with them. According to the last season statistics with the Canaries, he made almost 27 appearances and scored once. As a left back, his performances with the Canaries was too good in last summer and so, they were willing to loan him again in this summer but the boss of the Blues was not ready to let him go there but at the last moment he has confirmed two new signing in and got perfect alternatives of him. So, finally he loaned him to the Canaries.

Earlier this summer, just before the transfer window slam shut, Chelsea were desperate to sign a couple players to 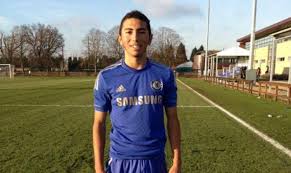 However, 21 years old Cristian Cuevas visited with the Blues in their last pre season tour. He also moved to Austria with them but did not able to make any single appearances with them till now since his arrival at the Stamford Bridge.

On the other side, Sint Truiden usually competes in Belgian top professional football tournament Belgian Pro League since the beginning but failed to win any title of it. They have finished their last season by standing in 12th position. As per the reason, they are desperate this times and wanted to secure their back line with experienced  hands however, the Chilean international made their last summer colorful, so, they did not hesitate to bring him again.

Though, Chilean defender has not made his debut with the Belgian side this summer and would probably start his journey from their next match against Mechelen in upcoming 10th September, 2016. Till now, they have already made five matches this season where the Belgian side won only one against Lokeren and lost thrice. They have drawn just one match against Anderlecht.

However, the left back started his professional career with O’Higgins where he made only 10 matches. Later, he moved to the Blues but while playing with them, spent last four season with Vitesse Arnhem, FC Eindhoven, U. de Chile and Sint Truiden. So, this loan period is his fifth consecutive loan season.