Bottom of the table side Pescara hosted Fiorentina in a mid week Serie-A game on the Wednesday night. The Violas got back to the winning way after a successful trip to the Stadio Adriatico. They came back from one goal behind position to win the game, thanks to the brace of former Barca winger Christian Tello.

After drawing Genoa in a six goal thriller at home just couple days ago, the Gigliatis were searching for a win and they got the considerably the weakest side in front of them to secure all the 3 points from the away fixture. Everyone would have expected a serious start for the visitors but with no one having seen it coming the visitors got themselves in a situation of bother as they conceded an early goal with just 15 minutes having passed in ref’s clock after the very first whistle. 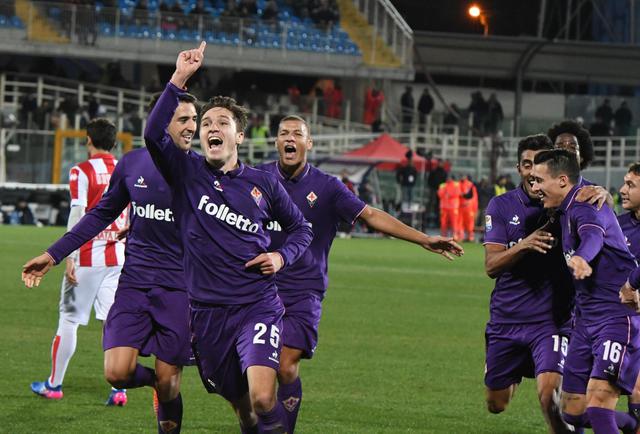 23 years old attacker of the homeside, Gianluca Caprari opened the scoring to give his side the lead. It was the 5th goal of the campaign for the Roma born forward. The young Italian had netted 14 times last season. The hosts finished the first half of the game with a goal’s advantage.

Fiorentina manager Paulo Sousa was eagerly searching for a goal and as soon as the second half started, he brought in his young gun Federico Chiesa, who had scored in his last game, in place of Nenad Tomovic. But the day was just a special one for winger Christian Tello. He levelled the line for the touring side on the 68th minute of the match. The assist was provided by Maximiliano Olivera. The game was heading towards a draw but the 25 years old Spaniard netted once again with just moments left to blow the last whistle of the game. Late substitution Sebastian Cristoforo was the assist provider on this occasion. The Sabadell born footballer has got 3 goals so far in this campaign who had netted just twice for the Violas last season. The former Porto attacker’s sparkling form gave his team 3 crucial points.

Paulo Sousa’s side has now moved to the 7th position in the league table after this victory with 37 points from the first 22 league games. Pescara who already has tasted 15 defeats, remained in the very last position with just 9 points from the same number of game as Fiorentina and are heading towards relegation. Fiorentina are now unbeaten in their last 5 league matches who had tasted their last league defeat back in mid December.