Cristiano Ronaldo won the FIFA World Player of the Year award once again. This became the second time the Real Madrid star won the most fascinating award by defeating against Argentina captain Messi.

Ronaldo won the ‘The Best FIFA Men’s Player’ award. It was finalised three name in before but Monday at Palladium Theater in London Ronaldo left behind Barcelona’s Messi and PSG’s Neymar.

The selection of the players has been considered from the year 20th November to 2nd July 2017. In August last year, FIFA published a short list of 24 people for this award. In September it was reduced to three people. And finally we got the one man who become really worthy of this award. 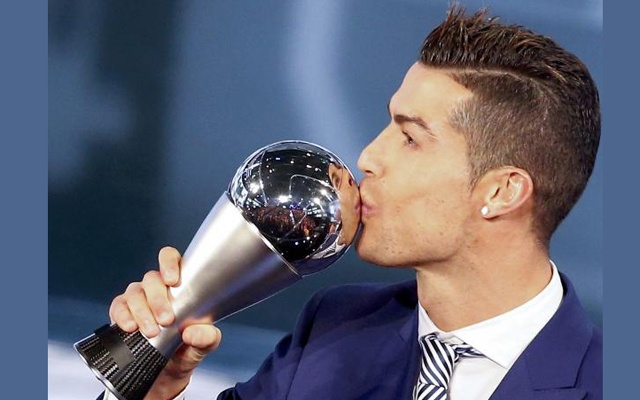 Apart from personal performances, Ronaldo won the title this year as he won four titles for Real Madrid. His name was announced as the winner of the ceremony, two legends Diego Maradona of Argentina and Ronaldo of Brazil.

Ronaldo won the fifth player of the year award and touched the Messi record who also won the prize for five times in before.

Ronaldo touched the milestone of 100 goals last season as the first player in the history of Europe’s most successful tournament. In addition, he has scored 12 goals, including two in the final of the Champions League.

Not only that Ronaldo, the club’s top scorer, touched the 400 goals scored in all competitions for Real Madrid in last may.

However, The result comes out only for football fans and Fifa elected journalists around the world who voted online for the star.

Zinedine Zidane, who won the Champions League title for the second time in Real Madrid, was awarded the FIFA World Cup coach of the year 2017. Last season, Chelsea won the Premier League Premier League, and Massimiliano Allegri, who won the semifinals of Uvantos, was shortlisted for three.

Everton’s goalkeeper Janului Buffeen has been awarded the goalkeeper of the year. At the shortlist for the award, there were included three people, Real Madrid’s Keylor Nava and Bundesliga winners Bayern Munich’s Manuel Nayar. Both were very decent footballer and worthy of the the prize and finally the title goes to Buffen.

However, the award most horrible facts for every footballer. And finally gaining that it is very amazing to get the honor in front of the world. As the World Cup Russia knocking at the door, the prize rise their confidence level in high so far.