David de Gea is crowned as the Manchester United’s player of the year once again. The Spanish is the only Manchester United footballer who snatch the Sir Matt Busby Player of the Year award for third time in a row. The successive award was announced on Monday night on the club’s annual award function at Old Trafford. The award was required by the vote of De Gea’s fans. It is the clear indication of the goal-keeper’s popularity and fan followers all over the world which wielded him to obtain the eulogy ahead of the other star performers like Daley Blind, Martial as well as Smalling.

The United goalkeeper was very happy for the great achievement, he exclaimed  his excitement in front of the media and said that it was too difficult to utter something for him but to win consecutively three season in a row is really a amazing matter. He also claimed that the Red devils are consisted the most fans in world wide and finally he thanked to the fans for his honorable acquisition. 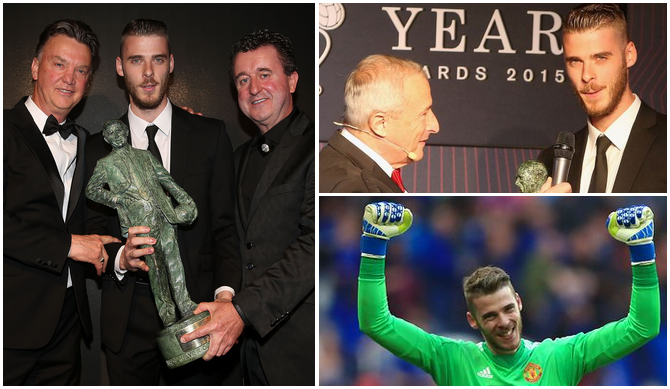 The Spanish Goalkeeper joined United club in 2011, where he composed over two hundred of appearances. Gea had won Premier League winner’s medal for once in 2013 edition. He is well known for his outstanding performances which boost to elect him player of the year award in a row of three years consecutive success.

Red Devil manager Louis van Gaal was very happy for Gea’s success and said that he is really worthy of the award. On the occasion he also added that  David was invited for the event in Madrid, where his girlfriend lives and thanked him to come there to leave his parents in Spain.

On the speeches the coach made some more conversation for the media, where he told about his authority and advice. He claimed he is the best manager of the world and also emerged arrogant to himself.

By giving reply to the media’s question he said the season gone very difficult and also confessed that the boys face more difficult challenge than him. He told the deal which was made with the players, was not so easy and being very tough and difficult.

The midfielder Juan Mata also praised for the Spanish goalkeeper and mentioned that Gea was always saving points for them and also added that for him David is the most compatible player in the club.

United Captain Wayne Rooney gave his personal opinion to the media on the prize giving award and said for him Chris and Daley was the brilliant for the team than David Gea. He also mentioned that as he went with Chris in the previous season so this season he expected for Daley.

However, along with the striker Cristiano Ronaldo, Roy Keane, Nistelrooy, Ruud van and also some other star players grab the award in back-to-back season but no one achieved the prize successively three years in a straight like Gea. It’s really a great achievement for the David Gea and also for Manchester United club.