Borussia Dortmund, continues their Semi final unbeaten run as they once again reached another final successfully this time by beating lifetime rivals Bayern Munich. The two German giants came head to head in a crucial DFB Pokal semi final clash on Wednesday night at the Allianz Arena. It was one of those most awaited fixtures in the German football as the two most successful club of recent time in Germany took on each other in a very important game and it proved to be a mouth watering contest between the two heavyweights. 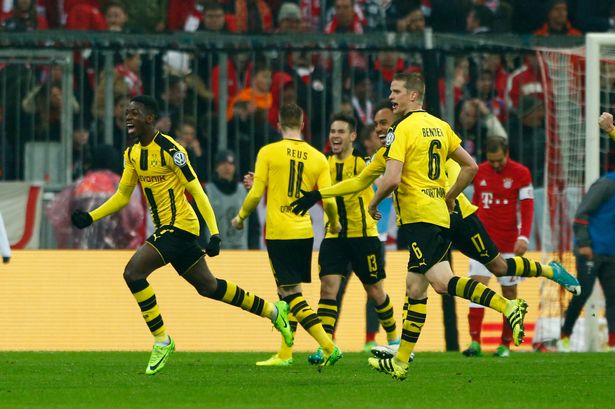 It was a great game for the football fans to watch as there was no shortage of entertainment as no less than 5 goals were scored in that war and it was a game to remember for the fans. Visiting side’s German super star Marco Reus opened the scoring for the Black and Yellows to give his team an early lead in the first half as the sensational forward scored on the 19th minute of the game to register his 11th strike of the season. Javi Martinez who missed the second leg of the UCL quarter final against the Los Blancos levelled the line 9 minutes later. It was the maiden goal of the season for the Spaniard. Mats Hummels put the hosts in front with less than 5 minutes remaining of the opening period and the Germany international registered his 3rd netting of the campaign and this time against his former club. He joined the Bavarians this season from the Signal Iduna Park based club. The first half ended with the 2-1 advantage for the home side.

Pierre Emerick Aubameyang, the Gabon international once again came forward to do what he did throughout the whole season, scored his 34th goal of the season for Thomas Tuchel’s team and equalized on the 69th minute. But it was Ousmane Dembele, who stole the show with a 74th minute decider to take his side into the final of the cup tournament thanks to an assist of in form Reus. The 19 years old has already scored on 9 occasions after joining from Ligue 1 club Rennes and the France attacker probably got his most crucial Dortmund goal so far to get the ticket of the final.

The Black and Yellows will face Frankfurt in the final at the end of the May and it was another huge blow for Bayern as they are now out of the DFB Pokal as well as the UEFA Champions League.