The newest superstar of the Paris Saint Germain side, Julian Draxler, who has just signed for them earlier this week for  £34 million has scored on his debut for the club. The highly rated young star has impressed his new fans as soon as he got the chance to appear on the pitch.

In a Coupe De France 32nd finals game against Bastia, on Saturday night, the 23 years old German midfielder didn’t start for the French giants. He came on to the pitch on the 58th minute of the game by replacing French midfielder Adrien Rabiot. But he didn’t take too many time to impress the fans as he managed to score his first ever goal for the current Ligue 1 champions with less than 35 minutes after coming onto the pitch.

Unai Emery’s lads squared off with their Ligue 1 rivals Bastia in an important clash of Coupe De France 32nd finals at the Parc des Princes. Brazilian centre half Thiago Silva opened the scoring for the hosts on the 31st minute of the game. Italy international Thiago Motta doubled the lead for the defending champions on the 42nd minute. The first half finished with the 2-0 advantage for the home side. 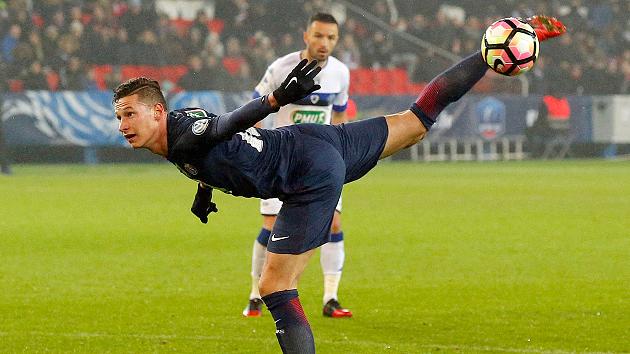 The second half got bad to worse for the visitors as they conceded no less than 5 goals in that period. 19 years old midfielder Christopher Nkunku scored the third goal on the 49th minute. 34 years old midfielder Motta got his personal second on the 57th minute. Referee Jerome Miguelgorry whistled for a spot kick and Brazilian winger Lucas Moura successfully converted it into the 5th goal of the match. Argentine Play maker Angel Di Maria increased the lead further on the 77th minute. Then the former Schalke 04 star Draxler struck the final nail on the Bastia’s coffin on the 89th minute as the Ligue 1 giants claimed a mammoth 7-0 victory to secure a place in the next rounds. The Parc des Princes based club is also the last 2 season’s champion of this cup tournament and are looking forward to defend the title and looking to take the trophy back to the capital of the France for the 3rd consecutive time.

The world cup winner with Germany, young Draxler had appeared in 14 matches for the Bundesliga side Borussia Monchengladbach this season, before joining PSG. But he didn’t find the net for the German giants this season. He joined the Gladbach side only just last season from their league rivals Schalke 04 after playing 6 seasons for the Dortmund based club.