Latin American giant Brazil are at just a one step distance from qualifying for the FIFA World Cup Russia 2018, as they beat another Latin team Paraguay by 3-0 margin at home. The game was held at Arena Corinthians, Sao Paulo, Brazil. Philippe Coutinho, Neymar Jr. and Marcelo scored for Brazil as they went on to beat Paraguay and finished the round as the leader of their group.

Barcelona forward Neymar, who have wore the captain’s armband almost after a year and first time under their current manager Tite and what a heroic return of the captain! He scored a goal and almost scored another if the penalty was not saved by the Paraguayan keeper.

Brazil almost had the whole game in their hands. They were dominating, but just the goal wasn’t coming as Paraguay were resisting hard. But their defense broke and the goal came at 34th minute as Coutinho and Paulinho playing one-two and Coutinho finished with style from a nice assist from the latter. Paulinho is very much in form as he had got a hat-trick at the previous game vs Uruguay. Crowd had just gone mad and they cheered for their national team in want for more goals. Paraguay won a free kick at 40th minute, but could not make that anything useful. First half ended in 1-0. 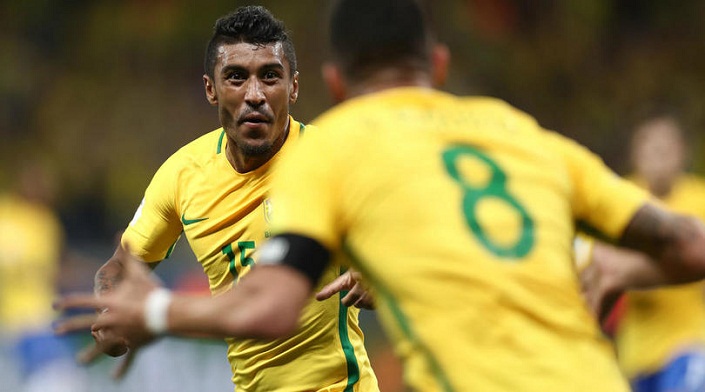 Second half started and both team were trying and looking for chances. At 50th minute Neymar got a low-cross from coutinho by the post but could not turn that into a goal. And he almost ran into the bar, he shouted out in pain. But, after some moments he got up and went back to running. Just after that incident, Neymar fall down in Paraguay box following a regular tackle by Rojas, a Paraguayan defender and referee had given it a penalty. Neymar came forward to take the kick but missed! Goalkeeper Anthony Domingo Silva stopped the shot from Neymar and kept him waiting for his first ever goal vs Paraguay. But couldn’t kept him waiting much as He got his first ever goal vs Paraguay at 64th minute of the game. He got the ball from Marcelo and dribbled past a few defenders and finally managed to dodge Paraguayan keeper and  turned that into goal. It is Neymar’s 52nd goal for his country. He is now at 4th position in the list of Brazil’s top scorer of all time following Pele, Ronaldo and Romario. After that 2nd goal Brazil started to keep the ball in their possession and look for more goal scoring chances. At 72nd minute a goal by Neymar was not given as he clearly was in offside. Paraguay should not have concede another goal after this humiliation from Brazil but they could not resist Brazil from scoring another goal and officially declaring them loser. Marcelo scored the third goal from a back heel from Paulinho by deceiving Silva at 86th minute. Paulinho took up his second assist of the game.

It is Brazil’s eighth successive win in world cup qualifying round and they are now the top of the Latin American group with 33 points and with that win they will most probably qualify for world cup with 5 rounds in hand.