A proverb goes that “Old is Gold” and Peter Crouch might be a genuine example of that. The former English international is already 36 and will turn 37 in the upcoming January but he is yet to be finished. He has still got it and probably better than some of the young footballers. He is getting older day by day but certainly hasn’t forgot how to score. The goal machine still knows the tactics of scoring and he has proved it once again, this time against Southampton. 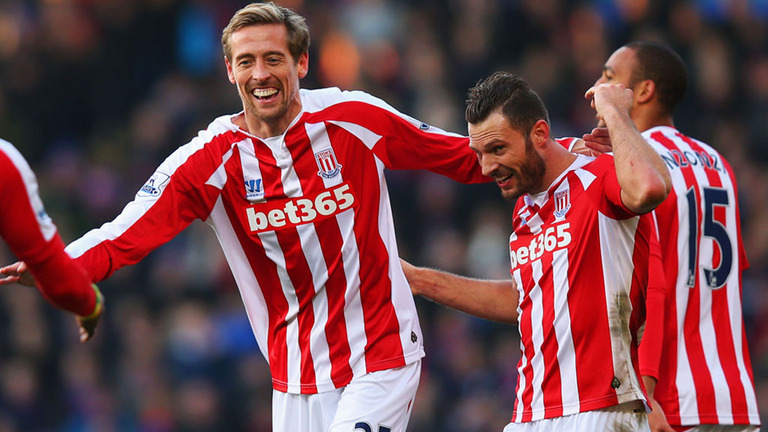 Stoke City hosted the Saints in their important Premier League fixture at the Britannia Stadium. Stoke City manager didn’t name the old Crouch in his starting line up but didn’t forget to keep him in the substitution list. The former Red Devil named the attack which was consisted of Swiss international Xherdan Shaqiri, Cameroon forward Eric Maxim Choupo-Moting and former West Bromwich Albion striker Saido Berahino. A thrilling and competitive match was expected from the two well matched side. The hosts were slightly the favourites due to the home advantage and they had made the most usage of it.

Senegal national team player Mame Biram Diouf broke the dead lock on the 40th minute with the opening goal of the clash. Referee Mike Jones awarded the home side a penalty just a couple of minutes later and they were on the verge to double the lead but English young striker Saido Berahino failed to convert the spot kick into the the 2nd goal for his team. Crouch replaced Berahino to come onto the pitch on the 70th minute. Japanese defender of the visitors, Maya Yoshida scored the leveller on the 75th minute, thanks to Shane Long’s assist. But the old gold Crouch stole the spot light as he scored the winner with just 5 minutes of normal time left in the ref’s clock.

The former Tottenham man gifts the Potter a much needed victory and crucial three points which sees them leveling the point wit their counter parts. Peter also played for Southampton in the 2004-05 season and netted on 12 occasions in his 26 outings for the St. Mary’s Stadium based club. Stoke City has moved to the 13th place in the league table with this victory, just one rank behind the Saints. Both club have earned 8 points from their first 7 league fixtures. The Potters will have a trip to the Etihad Stadium as they will face the league leaders in their next match after the international break.