Everton smashed the Citizens at the home on the Sunday afternoon. The two premier league giants squared off in an important league clash at the Goodison Park. The hosts showed no mercy to the visitors as they scored no less than 4 goals.

The number 5 ranked team visited to the number 7 ranked side and hard fighting was expected. But the scorecard was more than a shocker for the Citizens. It is one of the biggest defeats for the Sky Blues against the Toffees. It is also the biggest defeats in the league this season, for the Blues of Manchester.

Belgian super star opened the scoring for the hosts on the 34th minute of the game. The assist was provided by his compatriot Kevin Mirallas. It was the 13th competitive goal of the season for the 23 years old striker. Last season he netted 25 times for the club. The young Belgium international is also the 5th joint top scorer of the league this season along with Jermain Defoe, having scored 12 goals each. The first half finished with the 1-0 advantage for the Toffees. 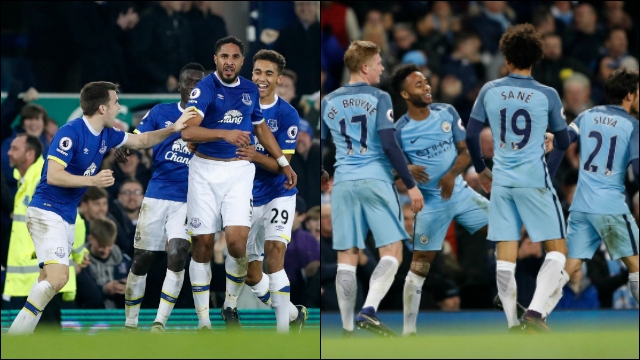 The home side started the second half on a high as 29 years old forward Kevin Mirallas scored inside 2 minutes of the 2nd half of the game to double the lead on the 47th minute. It was the 3rd goal of the campaign for the Belgian and Ross Barkley assisted on this occasion. 18 years old English midfielder Tom Davies increased the lead on the 79th minute. It was his first ever goal for the Everton main team. 19 years old attacker Adomela Lookman scored in the closing minutes add struck the final nail on the City’s coffin. The Nigerian has come under the lime light as he has managed to score on his debut for the Marseyside Blues.

It is the heaviest league defeat for Pep Guardiola as a manager. The Spaniard manager’s team remained on the 5th position after the defeat with 42 points from the first 21 matches. They are 10 points behind than the table toppers Chelsea. The 4th placed Arsenal are currently 2 points ahead of the Citizens. The Marseyside Blues remained on the 7th position with 33 points. Ronald Koeman’s lads have now won 3 out of their last 5 league games and will face Crystal Palace at the Selhurst Park in their very next league fixture. It is the 4th defeat in their last 10 games for the Man City side and they will be keen to bounce back against Tottenham in the next weekend.