Everton has completed the signing of Gylfi Sigurdsson from Swansea City. The man from the Iceland is very much highly ranked among the footballers of the English Premier League. The high profile midfielder was in the radar of several clubs because of his incredible run of form and skills for the Swans and was targeted by some managers. But Ronald Koeman successfully signed his long time target and it costed him no less than £45 million, which is a club record fee. 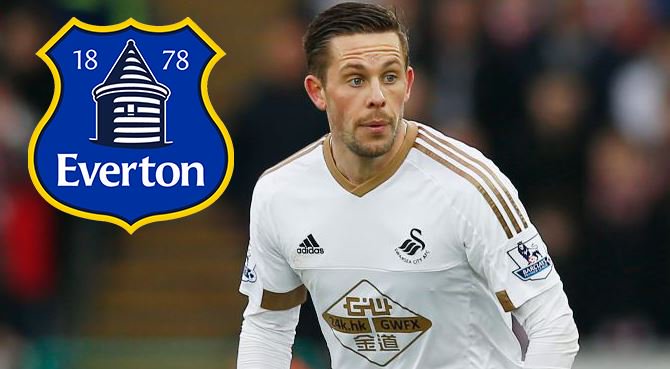 The Icelander has been the eighth new signing for the Toffees and will stay at least until June, 2022 as he has signed a contract for the 5 years. He is a tall figured footballer and had been very much crucial for them, during his time at the Liberty Stadium. The former Tottenham man was at loan to the Swansea in 2011-12 and then made a permanent move the club of South Wales back in 2014. Last 3 season, he played at the Liberty Stadium and scored 30 competitive goals during this period. He appeared in 112 competitive matches after joining there.

The 27 years old, who will turn 28 in the upcoming September, is known to be a spot kick specialist as he rarely misses any penalty and also admired for his phenomenal long range free kicks. The fans from the southern part of Wales will certainly miss his spot kicks. Everton boss Koeman was eager to bring him to the Goodison and that’s why didn’t care to break the club record transfer fee to land his desired lad. The Iceland international has played 3 official games so far for his new team and got his maiden Everton goal against Hajduk in the Uefa Europa League Play Off at Polijud.

The Reykjavik born footballer has been brought to create goals and score goals for the Toffees. The jubilant player faced the media after signing for the Marseyside Blues and talked about his ambitions. He cleared that he want to continue to score and create crucial goals at his new home. He was directly involved in 21 goals in the last season and also involved in 53 goals in the last 3 season in the league. He appreciated his new side and thinks that it is a high ambitious club who just want to win and try to climb up in the league table. He also indicates that he will try his best to do for the club and the fans. He didn’t stop himself from applauding his new manager and told that Koeman was one of his most favourite footballers of all time.