Jordan Pickford signs for Everton football club as the Marseyside Blues paid Sunderland club record fee for the goal keeper. The highly rated keeper was in the radar of several clubs and the Evertonians made no further late to land the potential super star. A club record fee of £25 million was paid to the Sunderland to bring the English man at the Goodison Park. But this could rise upto £30 million, depending on the team and individual performances. His forms between the posts for the Black Cats, impressed many clubs and managers and was ranked highly among the most wanted keepers in the English Premier League and finally was grabbed by Everton boss Ronald Koeman. 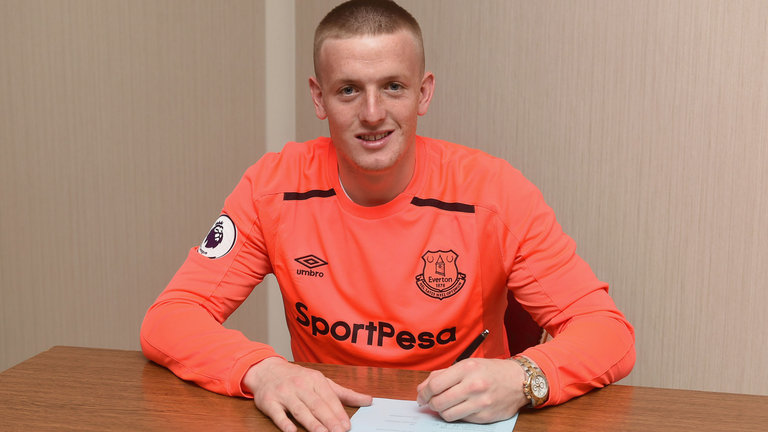 The 23 year old considered to be one of the most exciting prospects of the English football and is expected to have a very bright future as he was in sparkling form with the gloves in hand for a shaky Sunderland side. He signed a five year deal contract with the Toffees means he will stay at the Goodison until atleast the end of the 2021-22 season. The transfer fee paid for Jordan is not only Everton’s record fee but also the British record for a goal keeper and also only the third most in the history of world football (for the number 1 position).

The Washington (England) born footballer said after having the deal done that he was looking for a move to the Everton and he described his new team as a massive club and also said that he wants to boost his team with match wining saves. He expressed that it feels great to sign for a club like the Marseyside Blues and firmly believes that he can do unbelievable things wearing the new shirt of his new club.

The 6 feet 1 inch tall shot stopper represented England in all levels from under-16s to under-21s and earn a senior team call up in the last October. He got the chance to play in the EPL in the last season and revealed that he enjoyed very much. He was shortlisted in the PFA Young Player of the Season although his team Sunderland was relegated from the top tier competition of the English football. He thinks that it is a very much exciting time for him and his team and also said about his relations with Mason Holgate and other young Everton footballers and showed his eagerness to do something unbelievable for the Toffees.