Barcelona have complied to recompense €5.5 million fine over Brazilian star Neymar to accomplish the tax fraud case which was ocured in 2013 during his transfer from Santos.

Barca president Josep Maria Bartomeu has accepted on Monday that they have settled the solution of the tax fraud problem regarding of Neymar transfer to Barcelona.

Yesterday Barcelona’s has been arranged a board meeting by presence of current and former president to solve the problem and there arranged a voting program by the board member. After the program it was decided Barca will pay the tax money for their misdeeds. Among of all members, total two member was absence in the meeting and the voting process has been completed without them. 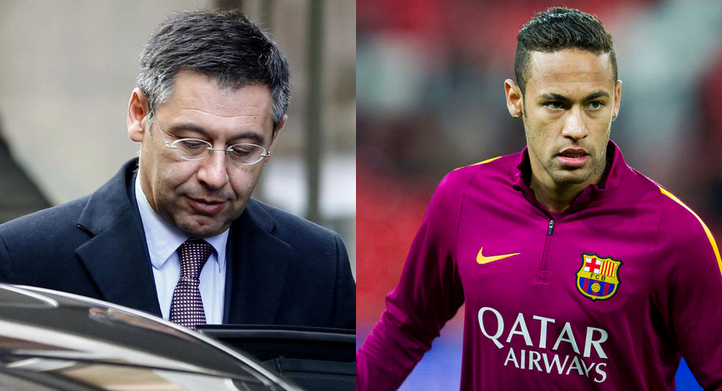 Josep Bartomeu mentioned that they would pay €5.5 million fine for the mistake which composed in 2011 and 2013 tax planning during of signing Neymar.

Bartomeu told reporters to accept the pact was much better than continue the uncertainty of pulling the case for a long period. He also command that it is too little amount of reference to the transfer deal which have to pay the Spanish authorities.

He also mentioned that the decision was not so easy but overall it was the best decision for the club either of court settlement. All knows the rules and regulation of the court, that’s why they accept the outside settlement by avoiding court brawl.

Actually the problems is created for hiding of real transfer compensation. The Brazilian Investment group DIS has been entitled of 40% compensation of Neymar’s transfer fee. But they complained that Barca were concealed the actual transfer fee to and they were given a very small amount. They also claimed that they have the rights of 40% of actual fee which was given Neymar father.

Bartomeu felt sorry for the misdeed and he termed that if he could get the chance to sign Neymar in again, he would have complete the process in the right way.  He also mentioned that the €40 million which was given to Neymar’s father was not included in transfer fee it was his simply salary. But he accept to repay the fine only for avoiding brawl of the court.

Whatever the matter, the main theme is that now the fine have to be paid by the respective club. Though the former president Rossel also linked with the matter and he is also responsible for the misdeed, the fine have to pay the Barca club.