Barcelona is a football club those believe in create young footballer. Cause of taking this part very seriously, they are able to earn revenue by club transfer. Even their most of the youth team kids support their main FCB team as well. This leading Spanish club comparatively spend less money then other popular clubs.

Lionel Messi is the best example of player making capability of Barcelona. FCB mentioned that they got another Messi from Argentina named Franco Bartucci. 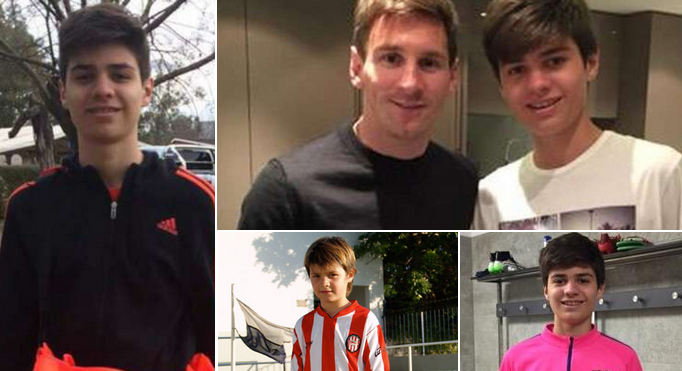 Bartucci is currently 16 year old boy who trained in Estudiantes which is a Argentine, La Plate based soccer club. They visited Spain couple of year back and played against FCB young team. His young forward’s finishing skill & dribbling capacity surprised the coaching stuff of Barcelona. FCB invited Franco as well in couple of occasions of them to visit them and learn more about this club.

However, finally FCB agreed to deal with Franco Bartucci for their youth team. Already the sign up procedure completed. This young striker will left Argentina in 22th July and join into the camp on 8th August, 2016. Need to mention that this youngster mentioned as the best footballer from his level in Argentina. Sport news also indicate his possible chance to become the Barcelona young team captain within short period of time.

Barcelona is hopeful about the make another productive footballer like Lionel Messi. There is a word that morning shows the day. We can guess that another superstar is coming in FCB & Argentina shortly who would come in spotlight within next 5 year.

Argentina is a nation those big earning source is football and they earn lot of foreign currency by developing footballer. Spain the best place for players to build their career by this profession. Argentina – Spain have a good relationship from a long time to buy – sell footballers. Actually, the nation of sky blue ensure the basic & inspiration to their kids and become legend by play in clubs & national team.

People already started to promote this young talent in media and hopeful about to see just another Lionel Messi. Though it’s true that football like Diago Maradona, Pele, Messi & Ronaldo born in a decade or, century years. But the matter is, football quality and skill developing day by day. Train up strategy and opportunity is growing up as well. We shouldn’t compare him like them but his skill mentioned that he would surely play in Argentina national team and FC Barcelona main team once upon a time. He would be the best footballer of his time being as well.