Lukas Podolski, the former Bayern Munich striker says final good bye to the international football arena. The German super star announced his retirement after the end of the Euro, on August 2016 and wore the German national shirt for the one last time when the Deutschland faced the England Lions in a friendly at the Signal Iduna Park, Dortmund on the Wednesday night.

The 31 years old ends his more than 12 years’ Germany national team career in some style as the Galatasaray forward scored the decider of the game with an epic and breathtaking thunderbolt to celebrate his 49th and last ever national team goal and to hand his team a glorious friendly victory over the rivals.

The attacker had a glorious career with the national team as well as his clubs. He has represented his country on 130 matches and scored on 49 occasions, just one short of the 50 goals’ landmark. He also won the world cup in Brazil. When Sebastian Rudy replaced the world cup winner on the 84th minute of the match, a colorific career came to an end and made the fans cry. 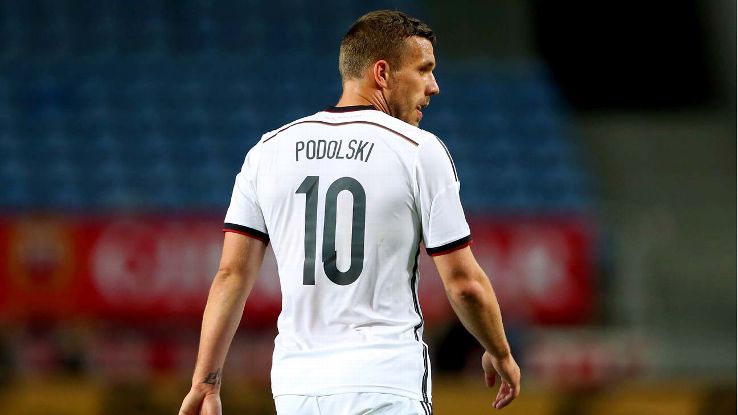 Now take a look at this successful and fans’ favourite footballer’s career. Although he played for Germany, actually he was born in Gliwice, Poland. He started his youth career at FC 07 Bergheim and then signed for FC Koln 5 years later and made his senior debut in 2003. He scored 46 goals for Koln before joining German champion Bayern Munich in 2006 and scored on 15 occasions for the Bavarians in his 4 years staying at the club. He once again returned to his youth club Koln and netted 33 times more for the Bundesliga side.

He signed for the English Premier League side Arsenal in 2012 and put his name on the card 19 times before joining Serie-A club Inter Milan on a loan deal in 2015. He gave the breakthrough just once during his time at Inter and then joined Turkish club Galatsaray in a permanent deal in 2015 and is currently playing there. He has featured in 47 matches for his current club and scored 18 goals so far.

A player of his quality is always a high ranked one in the recent football’s history and fans love him very much. His departure would be a big blow for his mates and specially for his die-hard fans but he proved once again, what he is capable off, with his thunderous  strike and gave his fans the one last chance to celebrate with him as the consistent scorer will never wear a German national shirt again. Good bye Poldi the Champion!