France and Real Madrid number 9 Karim Benzema will miss his upcoming fixtures of 4-6 weeks as he is suffering from a hamstring injury. He got the injury during a home game against la liga team Levante on 9th September, in which Real Madrid ended  the game with a upsetting 1-1 draw at their home. Whatever, this injury will take 1 and a half months from this Frechman’s career.

A Spanish daily named AS has reported that, Karim benzema will be out of the field for almost one and a half month because of that injury, which had seen him leaving the field in only 24 minutes of the game. 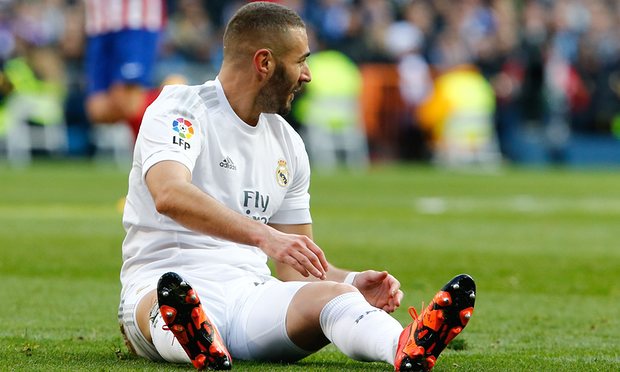 Los Blancos manager Zinedine Zidane, who is also a French had to alter his lineup after this injury of one of his key players and he has played his matches after that match with a changed squad and formation. Whatever, he has been missing one vital piece of his attacking trio, which had helped him to win the double of the last season which included the La Liga and the UCL.

Whatever, in the last season Karim Benzema had scored 11 goals in 29 matches which had helped his team to get over with many tough situations and that proved him as a crucial part of the Real Madrid attacking trio.

As this French striker and the central part of the BBC is now injured, now the mighty Cristiano Ronaldo and the Wales wizard Gareth Bale will have to carry their team to the glory. They have to bear the burden of the team and have to see that they Lose none of their potential chances no more as they have already lost one of the chances as they have lost their last match against Real Betis at their own home by 0-1, which was so much shocking. And it was more shocking because, the king of Madrid Cr7 was back in this macth after 5 matches of suspension, but was toothless in this match and Madrid have missed Benzema in this match and his combination with Cristiano Ronaldo.

Real Madrid, regularly looked better with Benzema than, without Benzema in the last season of their campaign. Madrid has scored 81 goals in the 27 matches he played in the last season, which shows an average of three goals per game, which is phenomenal. But, the average of goals in every games have become less when Benzema has not played as only 29 goals have been scored in 11 games, which shows 2.6 goals per game, which is a lot less than the average goals including this 29 years old France international in the squad.

This striker has missed 17 games in the last season for Real Madrid and Zidane will hope that they this latest injury of him is not as severe as the last season and hope him to come back and join in the team soon. Benzema is expected to miss two more champions league games, which will be against APOEL and Borussia Dortmund and he has already missed one champions league game against APOEL in the first leg at Cyprus.