The France striker Andre-Pierre who is linked with Mexican club Tigres becomes the summer target of Barcelona. Barcelona are looking forward for their backup role but they yet confused, who will be the best for the potential post. They are now in market and this time their target is 30 years French man. The boss Luis Enrique wanted that kind of forward who could cover the gap of trio front Neymar, Messi and Luis Suarez.

They have already thrown targets on Luciano Vietto, Nolito, Kevin Gameiro, Mundo Deportivo and now the Gignac but failed to choose the best choice. Actually it is quite difficult to find out the back of the three legend but the coach could not take any risk in case of absence theses football master. 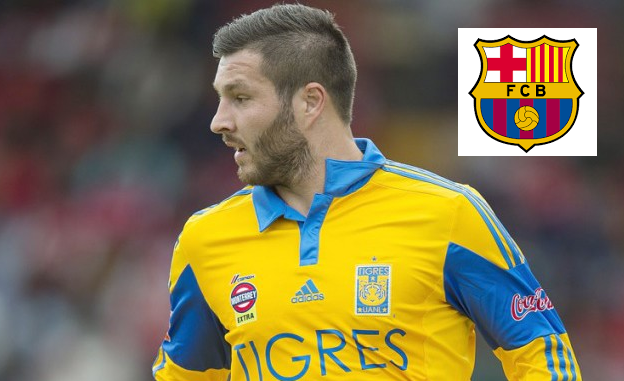 The Mexican Tigres coach Ricardo Ferretti claimed that Barcelona had not contact them about the move but the are ready to sell him on the La Liga club.

To Speak on ESPN Deportes, Ricardo mentioned that there were no official reach had been taken place but he gave assurance that the move should be possible ahead of 2016/17 campaign.

He also added that as far as he knew that there was no communication had take place between the clubs, although they said that Andre is on Barcelona list. He mentioned if they were interested they should make contact.

The coach also told that if the team Barca get pay the release clause, they will be free him and also ready to wished his best luck with the new club. Richardo also exclaimed that he chatted with him about it today with half joking and half seriously but he said that are the typical things and they would see what happen if there actually been some offer.

On the side, Tigres director Miguel Angel Garza also claimed that they are not linked for any deal from Barcelona. He also mentioned that they only came to know through media but there had nothing happen in official.

He also told that Gignac’s is very talented footballer who knew the better use of his position and he did not wants to leave the club.

Actually Gignac became a person who has fetched so much for the Tigres in ever at the on and also off pitch. Andre yet not termed any direct speech for the offer but the director assured that If he dreamt to play to La Liga giant, they could try to make the possibility and always wished his bright future so far.