Finally FC Barcelona have managed to sign a player as they were desperate to sign some one new to fill up the vacant position due to the departure of Brazilian sensation Neymar, who has moved to Paris Saint Germain for the world record transfer fee. The Catalans have brought in young French gun Ousmane Dembele from German Bundesliga side Ousmane Dembele. The forward was in great touch during his time at Signal Iduna Park and caught the eyes of the Europe’s elite panel with his incredible skills. 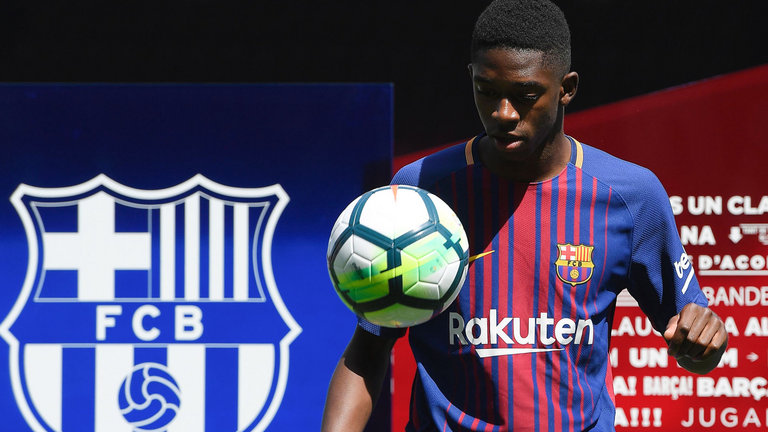 The Spanish giants have completed the signing of the attacker for £96 million initial cost but that might go up to £136 million with bonuses. Dortmund have done a great business as they bought the same player as a teenager, just a season before and it costed them just around 15 million Euro. So Dortmund fans wouldn’t be hurt a lot after his departure as it would let them buy several new potential faces with the money that the club will earn by selling Dembele. The Blaugranas have insert a release clause straightway and it is of £368 million which is much more higher than the one of Neymar.

The 20 years old signed a contract for the 5 years and has been unveiled by the club. The fans showed mixed reaction for the signing of their new ace. As the club football is having a short break due to the international schedules, the winger is expected to get his debut just after the international break. He might be in action against Espanyol for the very first time wearing a Barca jersey. It would be great occasion to get his debut as it is the local derby and will be played at his new home ground. The Catalans are currently at the second position in the league. Luis Suarez who suffered an injury, is also expected to be back against Espanyol.

The former Dortmund man hailed his new club and labelled Barca as the best in the continent. He is excited and pleased to join a club like FCB and also applauded his new side on Twitter. The new man will wear the number 11 jersey at Camp Nou, which was used to be wore by Neymar. The Vernon born footballer made his senior team debut for French Ligue 1side rennes in 2015 and then joined Dortmund in 2016 and appeared in 50 matches for the Yellows. He found the net on 10 occasions during his time at the Westfalenstadion.