It has been a perfect start of Jorge Sampaoli as Argentina’s head coach as he won two of the first two games of his Argentina career. Despite both of them being friendlies and one of them were not that much an elite opposition but a win i always a win. But, know Jorge Sampaoli’s Argentina a little more than we used to know 10 days ago. o, here we will discuss about some lessons we have got about Sampaoli’s Argentina from these two matches: 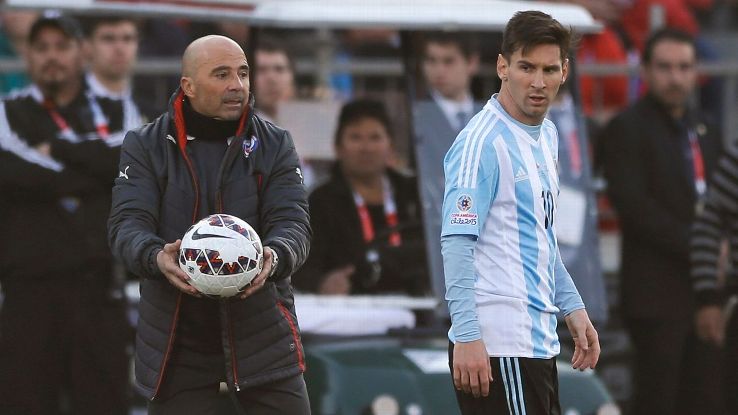 1. He is very keen to refresh the squad: Mauro Icardi’s injury and the departure of Lionel Messi, Gonzalo Higuain and Nicolas Otamendi caused the Argentine front side being less strength in the match against Singapore. But Sampoali confirmed that their will be no less of attack in the game as he replaced the big names with some other lesser known but effective names. As a matter of fact, in the game against Singapore where Argentine players scored 6 goals, a statistician confirmed that it is the first occasion in the history of Argentine national football team where five players of the team has scored their first international goal in the same match.

But it is true that, the other game against Brazil saw a more familiar squad which included some big names. And it is now is confirmed that, the younger players of the squad now can be more comfortable that now they know that the new coach is very keen to play some youngsters along with the established players.

2. The friendlies had some values but limited from footballing aspect: To be honest, Argentina Football Association are not flooding with money right now and that was most likely the reason why they have agreed to play friendly with Singapore. The money AFA will get by that will most probably be spent on Edgardo Bauza’s pay off and the wages of Jorge Sampaoli and the fee of Sevilla. The friendly match had some values in aspect of the financial state of AFA but it does not hold that much value in footballing aspect.

3. Smapoali has very well control on his versatility:  Chile was a very much flexible team while they were under Jorge Sampaoli. And Sampaoli has carried that legacy to his next target Sevilla FC. Argentines fans who have seen Sevilla in the last season under Jorge Sampaoli will not be very surprised to see their team in action against Brazil and Singapore. Those who have followed La Liga in the last season know the effectiveness of Sampaoli’s tactics and his versatility.

4. The change will be evident in the next fixtures: Sampaoli will certainly be happy after his two back to back wins against Brazil and Singapore, but the main hard time will be come in the upcoming future. As Argentina’s coach’s position is always a hot seat and Argentina is yet to qualify for the 2018 FIFA World Cup Russia and they have four more games in their hand and all of them seems like must win games for Argentina as La Albicelectes are now at the 5th position of South American zone. They will play their next qualifying round game against Uruguay in August 31. And that will not be as easy as the friendly game against Singapore. So, the thing to watch how Sampaoli will prepare his boys for the upcoming do or die schedule which will be going to start on 31 August with the match against Singapore.