Manolo Gabbiadini who has just joined the Saints of the Southampton from Serie-A giants Napoli for £17 million, has just managed to score on his debut. The Italy international has signed a four and a half year contract with the premier league club and has taken no time at all to create space in his newest fans’ heart as the 26 years old has got his maiden goal for his new club right on his debut match. The Italian attacker who had netted 5 goals for the Naples based club last season has just taken 12 minutes to open his Southampton as well as the English Premier League account. His debut started brilliantly but it could have been lot better if the Saints were not defeated by a touring West Ham side. Even after a superb start, Gabbiadini had to finish the game in a losing side. 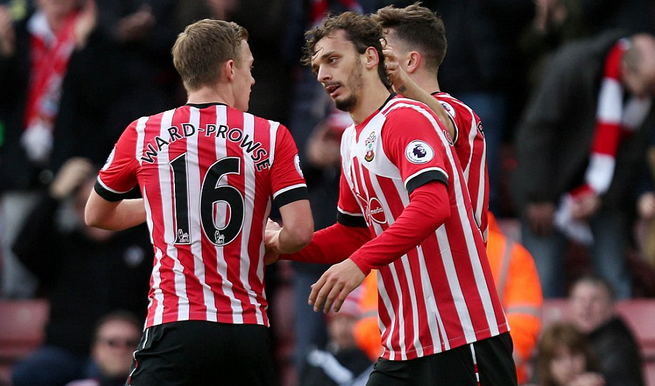 The Saints hosted the Hammers in a league clash at the St. Mary’s Stadium on the Saturday afternoon. After conceding an early goal, the visitors took less than 2 minutes to get back into the game as English forward Andy Carroll levelled the line on the 14th minute to register his 6th goal of the campaign. The 28 years old had netted on 9 occasions last season. Pedro Obiang provided the assist. Then with just a minute of the normal time left in the ref’s clock the Spanish midfielder Obiang scored himself to give his team the lead before the end of the first half and the visiting side finished the opening period on a high. It was the maiden goal in a West Ham shirt for the 24 years old in his 55th outing for the club.

Mark Noble scored the third and the final goal for his side which was also the last goal of the match, on the 52nd minute to hand his team a very important 3 points who were out of the form since the start of the season. The 29 years old English man got his 5th strike of the season and needs two more to match his last season’s 7 goal. The game finished with a 3-1 victory for the touring side.

West Ham has moved to the 9th position in the league table with 31 points beside their name after the first 24 league games and the Saints are currently sitting at the 13th position with 27 points from the very same number of game. Claude Puel must be worried about his lads’ form as it is their 6th defeat in their last 7 outings.