Gabriel Jesus is a famous young star of Brazil. He is playing in Manchester City. A good forward and also a key player of Brazil national team. But now it is a big thought for Brazil, is he will able to play in Russia world cup. This concern is making disappointed all the Brazil fan. 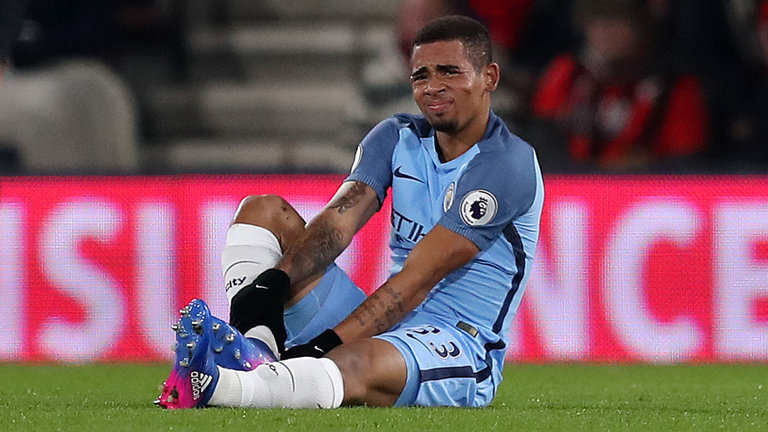 Jesus was falling down when the match was drawn without a goal. He was over-extending his knee and he was also crying in pain. But he bravely returned and played twenty minutes, after that it was clear he was not playing in the match because of his injury.  Tears in his eyes and it was streaming down on his face. Forward came and helped him to stand up but he was not able to walk.

The manager said, “ It will not be strong injury, maybe he will back within after one or two months”. But he was not sure or fully confident in his speech. The final report will come after in some day.

This is very disappointing news for Jesus, if it will very serious then he is going to miss next world cup at Russia. If damaged a collateral or posterior ligament in the joint he will suffer two months but if anterior cruciate ligament has gone, he has to say goodbye to this world cup.

Manchester City goalkeeper Ederson said, When I saw his tears eyes then I understood, he is crying for the world cup. He was concern about this injury and crying for his dream to playing as a part of Brazil.

Ederson said, Its make me sad that he is going to one or two months out of the field, out of the practice and out of the match. It is going to be very difficult for him because it is his second serious injury after joining in the Manchester City. But I pray he will get well soon and he will come with us, practice with us and help us every match.

Jesus doctor Dr. Ramon is hoping he will recover after two months. He said “I hope he will get well very soon and he can play in the world cup. This hope is a big thing to him.

Jesus absence is one of the big loses for Manchester City. But this will very bad news for Brazil because they have not a replacement in Jesus position and if he will not play its really concern for Brazil. He was performed very well recently and also performed every national team match. Without Jesus it will so difficult to make a strong world cup team.

The coach of Brazil also waiting for Jesus and if he comes after two months then it will the great news for Brazil. Jesus is most important part of Brazil team and they all hope he will come before the world cup.