Argentina beat Brazil in the super clasico by a single goal margin at MCG and it was in front of 95569 fans who were present at the stadium to see these age old rival of football. International football is such a type of game that any ordinary player can outshine the big names. That’s what happened in yesterday’s game of football between Brazil and Argentina. There were some big names like Lionel Messi, Angel Di Maria, Higuain, Mascherano, Dybala etc at the Argentine team. But, the hero was Gabriel Mercado as his only goal helped Argentina to beat their all time rival Brazil in super clasico.

Gabriel Mercado is currently playing in Sevilla FC. He gifted his former Sevilla coach and present Argentina coach Jorge Sampaoli a win in the debut match for Argentina. 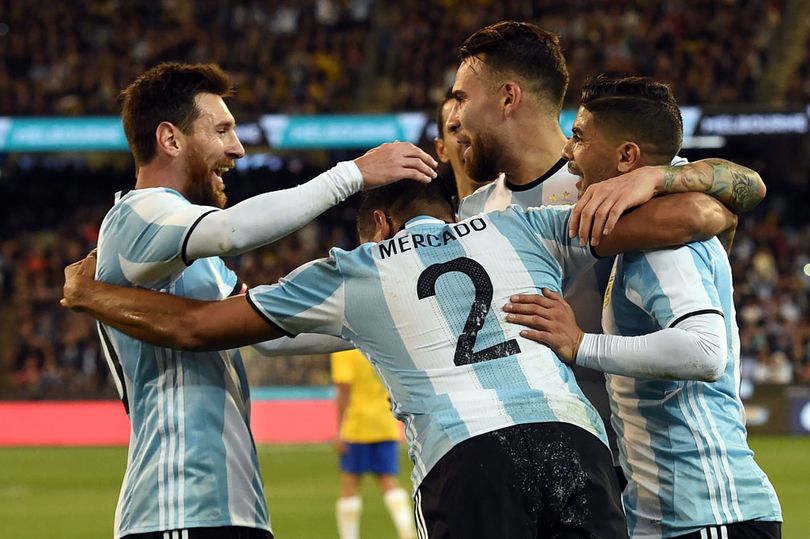 A stunning header from the head of Gabriel Mercado showed Argentina boss the hope of winning and it was the match decider after 90 minutes. Now, Jorge Sampaoli as well as his boys can certainly hope for the best in the qualifying round of World Cup 2018. Argentina is yet to confirm their World cup journey and the only have three matches in hand.

Argentina are now in the 5th position of South American zone’s points table and they are not yet confirmed to play in the World cup 2018. But Jorge Sampaoli can relief a bit as they have beaten their old rival Brazil which will certainly give them a confidence boost for the up coming qualifying round.

Brazil manager Tite tastes his first defeat after he has taken charge of the Brazil national team after 9 consecutive victories. But the reality could be different as Gabriel Jesus and WIllian almost had two goals but the ball came back off the post.

The team held a one minute’s silence as two Australians have died at London bridge attack and after that the game started. Argentina almost got the lead at 5th minute of the game by Angel Di Maria.

The former Real Madrid winger shared passes with Paulo Dybala but near the post but could not get past it as Brazil goal keeper stopped it.

But, gradually Brazil tried to steer their game and tried to create attacks. At 18 minutes Brazil’s Renato Augusto shot a curly shot over the post from distance which was a chance.

Brazil’s Philippe Coutinho was unmarked and Willian provided him a ball but Sergio Romero and Nicolas Otamendi was able to deny him.

After that, Argentina started to get back into the game. Again Di maria attacked with a volley but could not just finish. But, the Brazil goalkeeper just cold not stop the winning goal just before the half time break.

Brazil lost in a corner and Di Maria crossed in and Otamendi powered a header in the turf and after that an unmarked Mercado finished the with a tap in the empty post.

Tite’s boys tried to save their back as Jesus tried to hit a goal but Argentina’s keeper Sergio Romero saved this time.

After that nothing went to Brazil’s favor as Jesus missed once and Willian hit the post once showed Brazil could not get back to the game.

Whatever, Argentina is in front of the qualifying round and certainly this victory will be a confidence gainer for them.