Spansih manager of Manchester City, Pep Guardiola hails and applauds his central defender Vincent Kompany in a post match press conference after the victory against Crystal Palace. The former Barcelona manager was full of praise for the club and the Belgium national team captain as the strong lad continues to impress after coming back from a long term injury.

Man City hosted the Eagles in an important EPL clash on the Saturday at the Etihad Stadium. They claimed a 5-0 victory to settle their place in the top 4. Kompany  started against the Eagles and it was his 5th successive start and 6th in the last 7 games which is quite impressive after a long time absentee. Prior to April he only had made just six appearances whole season. He didn’t only started the game but also found the net on the 49th minute of the game to double the lead for his side and his manager couldn’t stop himself from praising the hard working lad. 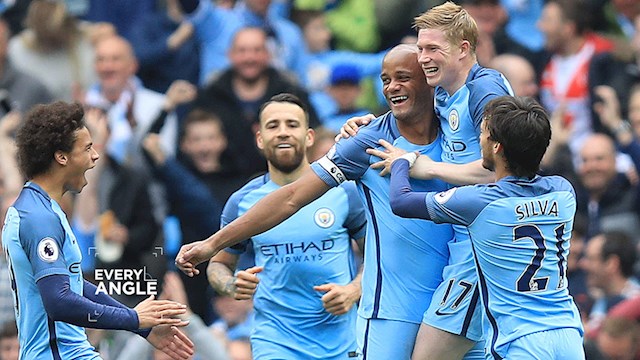 Guardiola begins talking and says that he really missed the big man and Guardiola adds that he is sure that Manuel Pellegrini missed Kompany a lot last season. He labelled the Belgian as one of the most influential players in the City’s recent history. Pep describes his captain as a real central defender as he thinks that Vinny wins a lot of aerial duels against the opposition strikers which is sensational. But the former Catalan Boss is conscious about the fitness issue and the back ups of the 31 year old as anything can happen any time in football. He continues to speak that when opposition delivers any crosses he always searches for Vinny to be there and that shows how much faith he has in the 31 year old centre half. Pep admires his fella’s hard working and recovering ability and ensures that he doesn’t put any pressure on him and wants to utilize him match by match.

Citizens are currently at the 4th spot in the league ladder with 69 points from the 35 EPL games and wants to finish at the top 4 to grab a UEFA Champions League spot. They completely hammered the Eagles with a 5-0 victory thanks to David Silva, Kompany, Kevin De Bruyne, Raheem Sterling and Nicolas Otamendi’s strikes. The Sky Blues will face the Foxes of Leicester City, the Baggies of West Brom at home and the Hornets of Watford away from the home in their next 3 and very final league fixtures.