English Premier League which is considered as the best football league in the world, keeps proving why it is really different than the other leagues. Although Chelsea are completely lead the competition this season but the battle for the 2nd, 3rd and 4th place is becoming more exciting as the days progress. The Spurs earned a vital victory to stay at the second place and their nearest rivals Man City also went back home with a victory and a clean sheet to firm their position at the 3rd position and the Citizens also have an extra match in their hands.

Tottenham Hotspur hosted the Everton Side in an important premier league clash at the White Hart Lane on the Sunday afternoon. This two teams had produced so many thrillers and epic battles when they came head to head with each other and another cracking match was expected. The players didn’t disappoint as the spectators had a fantastic game to watch. The game was entertaining as there was no shortage of goals as no less than 5 goals were scored by the both teams. 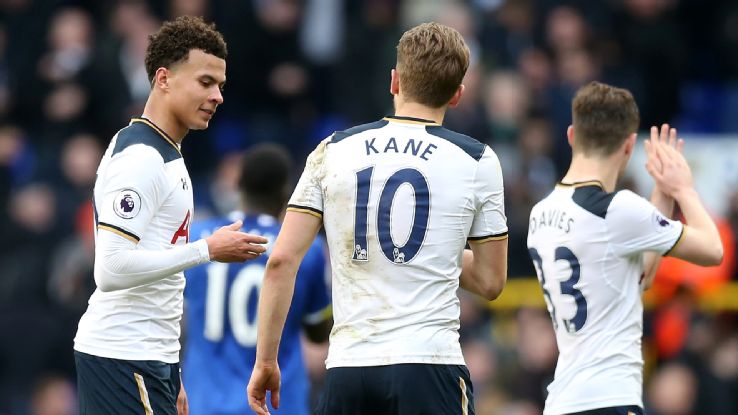 Harry Kane the England super star striker opened the scoring to break the dead lock on the 20th minute of the clash to give his team an early lead. The home side went to the break with one goal’s lead as no more goals were scored in the first half. The consistent scorer and the talisman of Pochettino’s side, who is also labelled as the “Hurricane”, Kane the goal machine was not pleased with just one goal and thus once again he puts his name on the score card on the 56th minute to double the lead for his side and it was the 24th strike of the season for the 23 years old Londra born footballer, who had scored 28 goals last season.

Romelu Lukaku, the Everton’s own version of Harry Kane also scored and made the card 2-1 on the 81st minute with his 19th strike of the campaign but new English sensation Dele Alli sealed the game for his side with a late strike as he made the score card 3-1. Ecuadorian striker of Everton, Enner Valencia just decreased the margin of the defeat for his club as he scored with just moments left on the clock and the hosts left the field with a 3-2 victory to stay at the 2nd position. Everton remained at the 7th position in the league ladder.