Isco, the first hat-trick in international football against Argentina, increased his confidence level in high. The play-maker grateful to the team head coach  Julen Lopezgie And Isco said the credit to his boss. According to his Lopezgie’s confidence in him was one of the reasons behind this achievement.

Spain beat Argentina 6-1 in Spain on Tuesday night. Isco himself scored three goals as well as scored a goal with Thiago Alcantara. The other two goals are Diego Costa and Iago Aspas.

Isco is not going to be good at this season in club football. This year, La Liga has scored five goals and scored for Real Madrid. Often losing the place, Zinedine Zidane’s team. 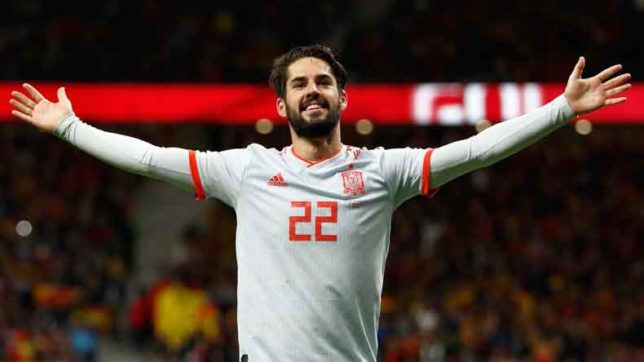 After making a hat-trick in the national team’s jersey, Isco said that this being the first time he scored three goals for national side. And of course, he being very happy that. The 25 years old also mentioned that the thing has possible for the beliefs of his coach. Aside from praising the national team coach Lopez Giacomo, Esco did not give up on Real coach Zidane.

By the state of his statement Julian trust him lost and his trust worked like magic stick. He also told that he could not win it in Madrid under Zidane. Because Madrid coach has not believed him at all. But the playmaker wanted to show of his performance. He also wants to prove himself that he being a good player.

Julen showed him confidence in a few minutes. The Spanish boy did not get the confidence that a footballer needs to be in Madrid. It may be his main problem. Te 25 years old also told that he really don’t know how to win the confidence of Madrid boss Zidane.

Isco a very talent guy. In club side he unable to prove himself as there already presented the wonder guys Cristiano Ronaldo. No one alternative of him. So it is too difficult to take his position for other. It become the place where they need to do hard work but result is zero.

However, with his hat-trick the team get biggest win over Argentina. The World champions once again they would be threat for Russia World Cup. Argentina got a biggest defeat in their football history. It’s really shameful for the nation. Though Messi was missing in the match but they need to be more good. But the forward back to his place and the team get back their lost confidence once again.