French by birth, Argentine star forward Gonzalo Higuain is the top goal scorer in 2015/16 season in Italian Napoli. He joined Napoli in 2013 where Arsenal and Napoli were in battle to bought him and Napoli won that war. They recruited him in spite of €40 million for next five years which will end in next June, 2018. The Little Donkeys appointed him number 9 shirt. Now, an update news has spread that he will not renew his contract which will valid in 2018, according to his agent. He has possible chance to depart Napoli as a free transfer after the deal will end if he does not leave before then. 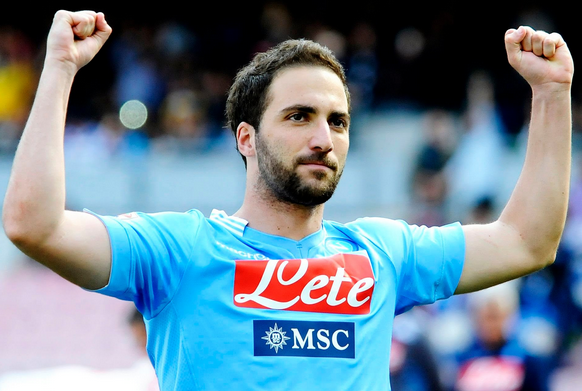 This 28 years old has enjoyed his last season in the Blues which was his best ever and where he has played 35 appearance and scored 36 goals so far which has made him Serie A top goal scorer in 2015/16.

According to his agent, Napoli has the right to give him a proposal about his extension due to his brilliant performance but Higuain has a clear choice to leave them. After the June, 2018, he will be free. But also he is respecting the contract of Napoli because he is professional however, he does not want any further extension with them.

On the other hand, based on this news, some leading English clubs are desperate to tie this world class forward. The giants of Premier League Manchester United, Arsenal, Liverpool and Chelsea are keen to recruit him. Spanish Atletico Madrid is also going to place a bid for this former Real Madrid striker though, they are not going to meet his €94 million release clause. They are ready to give €60 million which would rise to highest €65 million for this Argentine striker.

Chelsea boss Antonio Conte is also keen to bring this star forward to Stamford Bridge since his arriving in Chelsea, whispers says. Arsenal and Manchester United are just the other opponents where they have not placed any bid yet but to keep an eye on this matter. This Argentine great would like to play under Diego Simeone, Guardiola or Conte, according to his agent.

Since the beginning his career in Argentine national football team in 2009, Gonzalo Higuain has played totally 63 matches and scored 30 goals. last he participated in the centennial event of Copa America 2016 which has finished few days back. There he scored 4 important goals but to fail any score in final. As a result they lost against Chile in final.