Tigers have only few series during this year 2016 according to the FTP calendar of International Cricket Council (ICC). However, Bangladesh Cricket Board (BCB) doing conversation with Board of Control for Cricket in India (BCCI) to arrange a cricket series between India and Bangladesh. BCB already noticed that BCCI agreed to organize this tournament in Indian ground.

Bangladesh cricket team got test status in the year 2000 where they faced India in Bangabandhu Stadium, Khulna. Spin bowler Naimur Rahman Durjoy was the captain of the tigers that time and Sourav Ganguly played the role as a skipper for team India. 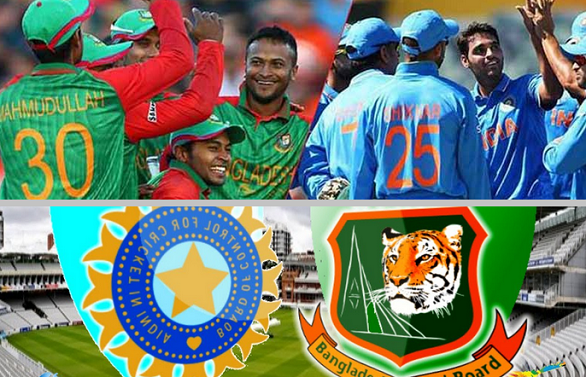 BCB offered BCCI to fix the name of this Bangladesh-India series for Durjoy-Ganguly trophy. Still the broad meeting & conversation going on between this two cricket board and hopefully we are going to see this upcoming series by this fantastic name.

This series would be held on September, 2016 where it was heard earlier that only test match will be held on. But right now having chance to play One Day International & Twenty20 matches as well. Schedule of this series still pending and it will finally announce around August when we are the fans can know all details.

India-Bangladesh played between them in the year 2015 in Dhaka where BCCI sent as like “A team” of them where MS Dhoni, Virat Kohli, Rohit Sharma, Shikhar Dhawan was absent. Though they won the series by 3 – 0 against the tigers.

Into the last couple of year, Bangladesh developed their cricket a lot and become took place ICC Champions trophy. This is why West Indies need to go out from this tournament as well. Last World cup performance of the tigers was extremely awesome as well. Few days back, people heard a rumor as well that BD cricket team will stand on 5th position in ICC world ranking. They got few professional cricketer like Mustafizur Rahman, Sabbir Rahman, Shoumy Sarkar, Abu Haider Rony as so.

After this IPL season 2016, BCCI sending India team to Zimbabwe where gave rest to their senior cricketers like Virat Kohli, Ajinkya Rahane, Shikhar Dhawan, Rohit Sharma, MS Dhoni and so. Basically, India would like to test their young cricketers in Zimbabwe’s land those performed well in IPL.

There is no doubt that Bangladesh-India match means extra entertainment in gallery, in front of TV set & in social media as well. Specially, the tigers as waiting for this series to challenge the men of blues in their ground.