Team India has recently started a series against New Zealand which tournament is consisting of three Test and five One Day Internationals (ODI) matches. The complete tournament will be hosted in India and so for this reason team New Zealand is currently visiting India. The tournament has officially started in 16th September, 2016 and they have played a warm up match against Mumbai which was a three days game. That game was drawn. However, the inaugural match against India national team has already over which started in 22nd September and end 26th. The first Test was won by Men in Blue which was their 500th number Test series also. 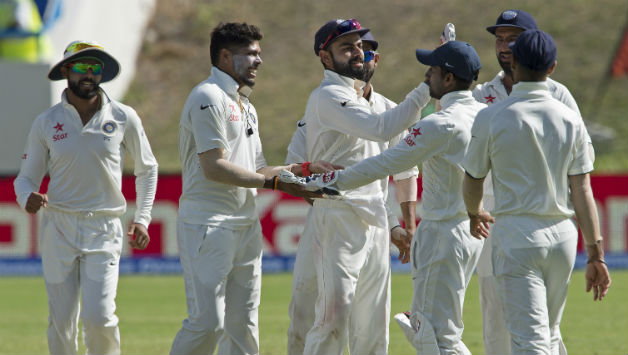 They are now playing their 2nd Test match which has started in 30th September, 2016. India won the toss and decided to bat first. The match is hosted in the largest play ground of India named Eden Garden which is situated in Kolkata. Came to at bat first, the Men in Blue did not use their home ground facility but to all out by collecting only mere score 316. Cheteshwar Pujara scored highest 87 runs for them. Chasing such amount, Black Caps only scored 204 runs by losing all wickets. In 2nd innings, India thought to show better performance but in vain. They only got 263 runs with again all wickets losing. Now, the fourth day of the tournament is going and New Zealand is chasing. Black Caps have already lost seven wickets and they need 198 more runs to win with three wickets in hand.

Indian Test Cricket team is currently led by master batsman Virat Kohli. He is also playing with his team against the Black Caps. But Ms Dhoni is not in the squad but would be selected for the ODI series which will start in next 16th October, 2016. Though, Kohli is a dashing middle order batsman and also compared with the Indian legend Sachin Tendulkar but in this series, he has failed to make justice on his name.

Besides, India is the team which has the strongest batting line up since long time. So, this mere figure seems not to match with them. However, this Test match is their 250th number home Test competition and they obviously want to celebrate it but not without victory. Also they are too close to grab another victory. And by winning this match, they want to confirm the series and after the match, the result would be on their side by 2 – 0. Besides, they just lost their chance to reach the top of the Test ranking and currently standing 2nd in position. And if they would able to whitewash the Black Caps, then probably get a chance to regain their previous honour.