India has started to play their last Test in this tournament against New Zealand yesterday at Holkar Stadium, Indore. The Black Caps are recently visiting India for playing a Test and ODI series. The competition began with the Test series but before the main event start, the Black Caps also played a warm up match against Mumbai. The inaugural Test match started in 22nd September, 2016 where Men in Blue defeated New Zealand by 197 runs and in 2nd Test, India won there too by 178 runs. And now, they have just started their last long format competition in 8th October, 2016 where India won the toss and decided to bat first. At the end of the 1st day, Men in Blue scored 267 runs by losing three wickets. Virat Kohli who is the current skipper of Indian team has made his first Test century in this tournament and still in the bat. 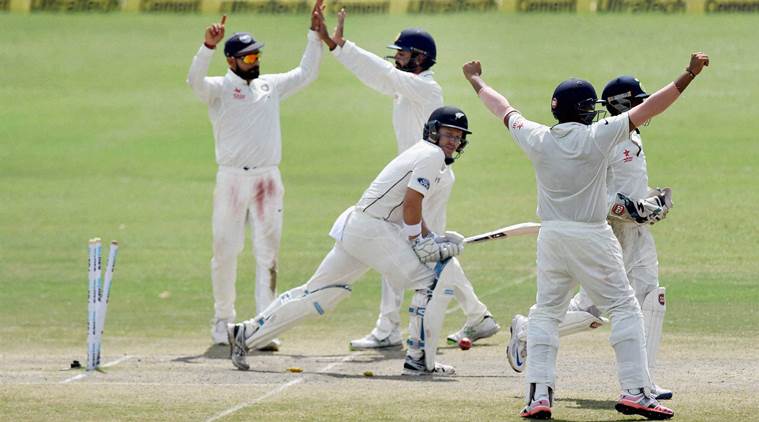 It seems that the match is still in the hand of India and they are dominating Black Caps bowlers. Through this match, another Indian player Ajinkya Rahane has reached 2000 runs milestone which makes him 36th Indian player to achieve the honour. India is currently looking to whitewash New Zealand because before the long format competition, they faced last time in 2013/14 when India visited island nation and there Black Caps defeated them by 1 – 0. So, as usual, Kohli battalion are looking for a revenge and also there is another big reason. They have currently jumped to the top of the Test ranking by replacing Pakistan though ICC yet to update the ranking but Dhoni squad has already achieved more points. So, they just want to secure their position by just destroying island nation here. Besides, they still have a plenty of Test matches in their upcoming schedule before next march, 2017. The amount of the match will be almost 9.

However, team India totally played 56 long format competitions against New Zealand where Men in Blue won 20 times and lost 10 times. Rest 26 matches were drawn. So, according to the calculation and previous statistics, Kohli battalion is the hot favourite and would win their last Test. Last time, the island nation visited India in August, 2016 where they played twice long format competitions and Men in Blue won both twice matches.

Besides, it is proved that Kohli battalion has the most powerful batting line up which would de dominated the opponent bowlers. Though, their regular captain MS Dhoni is not playing this tournament but also they have plenty of batting options. However, MS Dhoni will play next ODI series as their skipper.