Barca defender Jordi Alba forced to rule out from the side at least 10 days. The Spanish defender has injured Thursday night when he played international duty against Italy at Turin in World Cup qualifier. After he has been sent for Medical treatment and the doctors confirmed him left thigh injury. According to report he have to rest at least ten days.

The Barca star hurt by himself, there were nobody related with his injury. Doctor confirmed it has not more serious and soon he could back the side. Now the coach Luis Enrique have to find an appropriate defender on his post. Normally Barca suffering for a good defender and the sudden break of the the Spanish make them more worried. 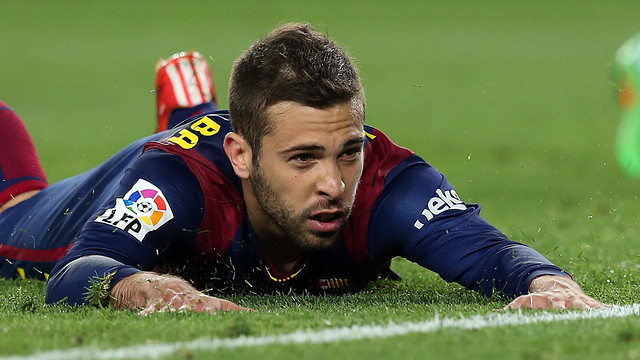 By the state of the report Enrique would set  Lucas Digne to cover the gap of Alba. Digne became the new sign of Summer. He made jump from PSG to Barcelona. The French is very tough defender and considering the ability to stop opposition attack. He has also played well earlier in this season when he performed the Aba’s position. Now it is planning to set him for upcoming few matches until Alba’s back.

This season Alba has made eight appearances for the Catalan side. He has missed just one game against Sevilla and for injury now he have to stay away from the side 10 days. The 27 years old joined the side in 2012. With a €14 million fee he signed the contract of five years. In 2015 his contract has been extended for more five years. He became the part of La Liga Champion last season.

Everyone is aware about his capacity and ability. Before Barcelona he was the member of Valencia where he passed three years, 2009 t0 20012. Now the former Valencia defender happy with the Barcelona.

Barcelona existing in fourth place in La Liga point table where the Atletico Madrid leading with 14 points. The Real Madrid consisting second position with the same point. Real Madrid was the topper of the list with their unbeaten performance but last three consecutive draw forced them to hold the second position. Barcelona had the great chance to hold the top place but their unexpected defeat against Celta Vigo pulldown them in the 4th position.

There have yet much time to establish their position. Now the fans just waiting for their star player Messi. So Let’s see what happen in the next. To get update linked with us.