Italian national team footballer Emanuele Giaccherini is an attacking midfielder or winger. He has currently joined the Italian top club Napoli in favor of £2 million reportedly from Sunderland.

This 31 years old Italian winger was recruited by Sunderland in 16th July, 2013 for four years agreement from Juventus and the transfer fee was unveiled. But, he failed to fulfill their expectation in Sunderland and could not regular in their first team. He played for Sunderland total 32 matches till now and made only four league goals so far. But Giaccherini wanted to remain with them though Sunderland wanted to sell him out. In 31st August, 2015, this winger was collected by Bologna for loan from Sunderland. Luck has favoured him at last in Bologna. He finally has shown his true color with this Italian club and also in Euro 2016 which has finished few days back. He scored seven league goals in Bologna by playing 28 appearance. In the Euro 2016, the first match of Italy against Belgium, Giaccherini achieved an important goal and defeated Belgium by 2 – 0. Giaccherini was announced the player of the match later. 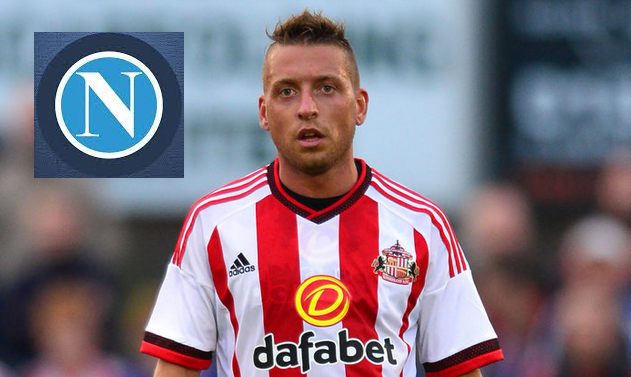 Due to his impressive performance in last season, as like many clubs, Napoli is convinced and finally tie him in order to give £2 million.

The manager of Napoli Maurizio Sarri believes that Emanuele Giaccherini would possibly prove once again in his club. Giaccherini stated that he has joined a powerful club and he is now happy with them. He can not to start playing with them, he also added.

Born in Bibbiena, Tuscany, Italy, this winger played with Cesena since 2004 to 2011 which was his first club. In the meantime, he almost played for three different clubs as a loan named Forli in 2004/05, Bellaria Igea and Pavia. In Cesena, he scored 20 league goals where played 97 appearance. Juventus was his 2nd official club where he joined there in 25th August, 2011.

Team Juve wanted to keep him till June, 2015 but unfortunately due to insufficient fund they were forced to sell him to English club Sunderland. He played with the Juve 40 matches and achieved 4 goals.

Giaccherini is currently playing for Italian national team since 2012 and till now he has played 29 matches for them and scored 4 goals.

So, now, this attacking midfielder has finally completed all the procedure to permanently join Italian side Napoli in order to get €1.5 million per season along with bonuses with a three years contract. He has already passed his medical yesterday and arrived at the training camp.