Real Madrid midfielder James Rodriguez joins Bundesliga champions Bayern Munich on a loan deal of two years. The Colombian was not quite a regular starter at the Santiago Bernabeu and Zinedine Zidane let him join the Bavarians on a loan deal. The German champions were looking for a versatile player in the heart of field and they have found their option and most probably the best option they could have added to their squad. There is an option in the contract to sign the footballer permanently in 2019, when the loan spell will be finished. 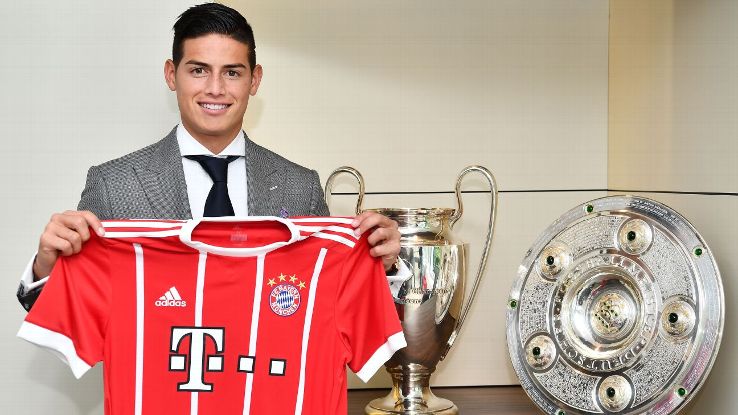 The attacking midfielder who just turned 26 earlier this month, was looking for a permanent place in starting line up. But Los Blancos’ manager Zidane couldn’t provide him that place as Modric, Casemiro, Kroos, Bale, CR7 and Benzema, all off them are well settled in the first xi and the Colombia international might get the regular chances to start at the Allianz Arena as the Carlo Ancelotti’s side has let Douglas Costa go. The Brazilian winger has joined Serie-A title holder Juventus. So there shouldn’t be any problem for James to get his place set in the best xi of Bayern.

The Colombian sensation caught the attention of the football world during the 2014 FIFA World Cup with his brilliant performances and the smart guy also achieved the Golden Boot award on that occasion. Then he joined the Galacticos and after that he has won 2 UEFA Champions League titles. He also won the La Liga last season with Los Blancos. Bayern chairman Karl Heinz Rummenigge expressed his happiness after having the transfer done. He said that it was a wish from the manager Carlo Ancelotti as the Italian also worked with the midfield warrior during his job as the Real Madrid manager. He also described the new signing as a versatile player on the pitch and thinks that he is good and useful at setting up goals and also at set pieces. Rummenigge also said that he has no doubt the signing has increased the quality of the squad.

The Bundesliga title holders also finalized the signings of Corentin Tolisso from Lyon, former Arsenal player Serge Gnabry from Werder Bremen, Kingsley Koman from Juventus, Sebastian Rudy and Niklas Sule from Hoffenheim. Gnabry and young Portuguese Renato Sanches are expected to go out on loan to gather and earn experiences. The Bayern chairman indicated that Renato urgently needs minutes out on the pitch after that injury and irregularity.