The Colombian star James Rodriguez has been thrown out from the starting line up of Real Madrid. According to report the Colombian International has been cut out from Zinedine Zidane’s favorite 4-3-3 formation.

Rodriguez joined Madrid in 2014 when he got the Golden Boot in Brazil World Cup. The Clause for the Colombian legend held of €80 million from and James signed the deal with Blancos by leaving Monaco. The first season was spent very good where he score of 14 outstanding goals with 15 assist. 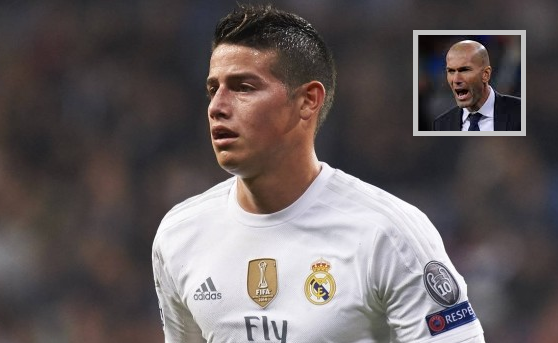 But the last season he had gone dull and he did not able to give well performance. And that’s why the head coach Zinedine Zidane side out the winger from best XI. At this situation James seemed very disappointed and he protest the decision of team manager. He determined not to leave the club and keep his place on the side.

Jame also mentioned that the whites have received a €85 million bid for him but he had not wanted to leave the side. He wanted to fulfill his dream with Real Madrid Club. And he totally denied to play for any other club.

By speaking about that Zidane told that Rodriguez must an asset for the side but the present condition of him is not hide to all. He also mentioned the Champions League final win against Atletico Madrid which was grabbed by penalty shot.

He also assured that the idea with James will be remain as same as the other guys in squad. He also said strongly that James is even a Real Madrid footballer but the the fact is that he is not included in the starting XI.

On the speech he required he had not dismissed the Colombian and would be always starter and an important man of the side. But as a coach he had some responsibilities of team and that’s why he had take the decision.

As a team selector he have to take some complicated step but it’s only for the team nothing at personal. And at this time he becomes fulfill his responsibility.

James promise to do well his performance in the next. He believed that from the bad time people learnt more and from those situation he learnt more. This time he would prove his skill on field. So let’s see what happen and where will be finished the battle of James vs Zidane.