Where is the next destination of Liverpool’s midfielder Joe Allen? Is he interested to go his former club Swansea City or joining a new one Sevilla. Both showed very much interest for him. Both are also challenge each other for signing him.

This 26 years Wales man was spent his five year in Liberty Stadium and after that he was signed in at Liverpool and switch to Anfield stadium at 2012. Before this sign in he was also played in Swansea City’s youth and senior club. 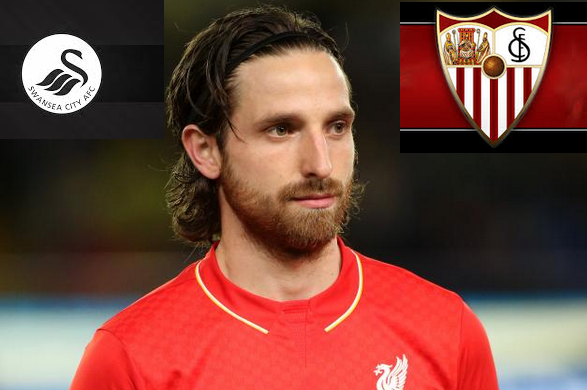 For this valuable midfielder The Red wants non-negotiable £10 million. His former club also registered in this offer and also they want to re-sign with their old student.

The other Spanish giant Sevilla also wants him for their next season in La Liga. The Europa League champions are also interested for Roque Mesa from Las Palmas. But they encourage by this Wales man.

Allen want to starting new season in other one and he is not enjoy to play under Jurgen Klopp. So The Red wants to sell him and they have placed a non-negotiable £10 million price tag.

Both have been done meeting with Liverpool and asking them his price. Both are trying hardly to sign this midfielder i their club. Francesco Guidolin has also offered him £8 million for signing.

This Wales man is now playing in Euro 2016 and they are perform amazing as an underdog team. He performed eye catching in this tournament. The Red also want to buy other best midfielder in his place and also searching from now. They also interested for Zielinski and they want to bid £11 million for him.

It’s saying very difficult where is the next destination of Joe Allen? Is he interested to go for his old school or starting a new carrier in Sevilla. We will also confirm this after his releasing from this Euro Cup. But there is running a small war between Sevilla against Swansea City to signing him. His former club Swansea also one step closer than Sevilla to signing him, they also want to fix him in £8 million. The other Spanish giant just meted his agent but not confirm any thing about the deal.

This is really interesting for Joe Allen, where will his next destination? Is he leave from England or Premier League and join in the Spanish club and also play in La Liga. To see this we have to wait to end of this transfer window.