AFC Bournemouth finally gets their much wanted victory after a long run of not getting a victory in the recent matches. The Cherries were without a win in their last 8 league matches and were seeking for all 3 points badly as they were defeated 5 times and drew another 3 times in that bad period. But Eddie Howe’s lads probably got the energy and courage back in themselves after an unexpected 1-1 draw at the Old Trafford against in form Manchester United side and that belief and faith has now led them towards their first league victory of the year. It’s quite shocking that already more than 3 and a quarter month have passed and the Goldsands based side were without a victory but finally they have broken the dead lock on the 70th day of the year!

The Boscombes hosted the Hammers in an English Premier League clash at the Vitality Stadium on the Saturday afternoon and Norway international Joshua King’s sparkling form continued as the attacker grabbed a hat-trick as well as the match ball to give his team the very first all 3 points of the 2017. 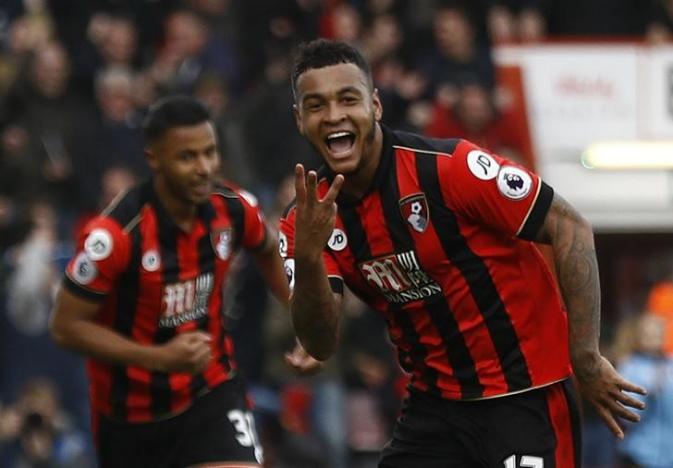 The visitors got a flying start as they got an early lead even before 10 minutes having passed on the referee’s clock. English midfielder Michail Antonio opened the scoring on the 10th minute of the match with his 9th strike of the season. The 26 years old had netted on 9 occasions in the last season too and this time he has already matched with plenty of games still remaining in this campaign. Joshua King levelled the line with his first goal of the night on the 31st minute. The first half-finished level.

King was not holding back and he gave the home side the 2-1 lead just on the 3rd minute of the 2nd half. Benik Afobe provided the assist. Andre Ayew scored the equalizer for the touring party on the 83rd minute, it was his 3rd goal of the season. The match was heading towards a draw but King was certainly not happy with 1 point and thus he scored the decider right on the 90th minute and also completed his personal hat-trick of the night. The Oslo born footballer has already scored 11 games in this ongoing campaign and the 24 years old is getting better and better day by day.

Bournemouth is currently sitting at the 14th position in the league table with 30 points beside their name and west Ham are at the 11th position with 33 points. Both the team have played 28 games so far.