FC Barcelona who has recently created history in the UEFA Champions League by managing to perform the greatest comeback in the UCL history, has been stunt by Deportivo La Coruna side in their very next fixture in the La Liga. Luis Enrique’s lads were flying high after securing an unexpected place in UCL Quarter Final by thrashing PSG 6-1 t the Camp Nou and they traveled to the Estadio Riazor with all good recent memories and good energy but soon they were shown the other side of the coin by their counter parts as they have been defeated by a bottom of the table side and which could be proved costly in their this season’s title race.

The Branquiazuis hosted the Blaugranas in a Liga BBVA clash on the Sunday afternoon at the Estadio Riazor. Considering the recent form of the Catalans, an easy victory was expected for them. Barca had scored total 12 times in their very last 2 tours to the Riazor and a Luis Suarez master class performance had seen them netting total 8 goals in the La Coruna net on the very last meeting against the Super Depor Herculinos. So an easy win was on the card for the table topper but with almost no one having seen it coming the mighty Blaugranas were forced to go back home with absolutely nothing. 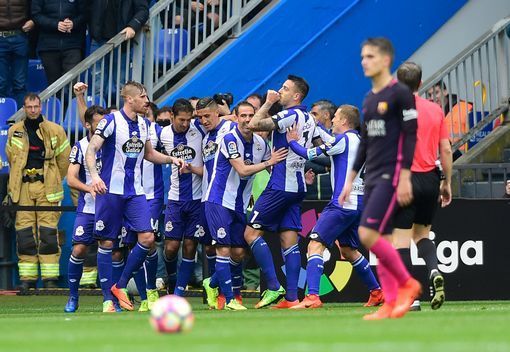 The spectators had to wait till the 40th minute for the very first goal of the game and finally Spaniard attacker Joselu broke the dead lock on the 40th minute to give the home side the lead. It was the 4th goal of the season for the former Stoke City forward who will be 27 on the last week of this month. The first half-finished with the 1 goal’s advantage for the hosts.

The Catalans were keen to get the equalizer and they didn’t have to wait too long as in form striker Luis Suarez leveled the line on the opening minute of the second half with his 29th goal of the campaign. But today was not Barca’s day and a 74th minute decider from Alejandro Bergantinos secured the all 3 points from the game for the Depor Turcos.

Luis Enrique’s team were without Neymar and they have certainly missed the Brazilian’s absentee. Barca were still at the top of the table after the end of the game with 60 points beside their names and were 1 point ahead of their rivals Real Madrid although the Galacticos had two more games in hand.