Juventus is currently scouting Aston Villa stopper Pierluigi Gollini who has recently arrived at the Villa Park in 8th July, 2016. Aston Villa competed in Premier League last season and placed in 20th position after end of the season. So, they were relegated to second division named Championship league and so, Pierluigi Gollini does not able to play EPL this summer. However, he began his youth journey with Italian Fiorentina’s youth academy but later moved to the Red Devils youth academy in 2012. He is an Italian by birth and currently just 20 years old and yet to get call from Italian national team but he came back to the Italian side after finishing two years with Manchester United youth academy. Then he joined with Hellas Verona and made his Serie A debut in 24th September, 2014 against Genoa. He totally played with them 29 appearances. By showing amazing skill with them, Aston Villa coach Steve Bruce was impressed and bought him at the Villa Park in last summer transfer window. Within very short time, he established himself as the key stopper of the club and taken place into their regular squad. He made 11 Championship appearances with the Villa and in the meantime only conceding nine goals so far which is made him as the first choice of the Steve Bruce. 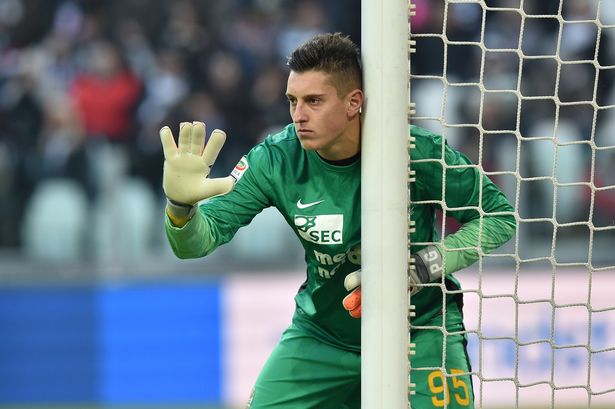 However, Pierluigi Gollini is currently wanted by Italian champion Juventus and Juve boss Massimiliano Allegri has watched him since his arriving at the Villa Park. Chief of Juventus willing to make a long term contract with him and very hopeful about his future. The 21 years old Italian keeper would able to play long time with the Old Lady and he is perfectly fit for the club. Though, he yet to make national debut but played for national youth team squad.

English side Aston Villa passed very busy moment in last summer transfer window when they tried to include some potential players in their squad. Basically, they bought nine players in last summer and among them Italian goalkeeper Pierluigi Gollini was regarded as the major addition where the fee was undisclosed but not less than £4.1 million.

However, the regular stopper of the Villa named Brad Guzan was sold to the Middlesbrough in last summer and the Italian keeper was replaced by the position and get the chance. Though, he is very happy to play with the English side but he deserves better than that. And if he would receive a great offer from Juventus, he would better to move their for his own good. Besides, it will help him to make a good future in Italy rather than English side.