Juventus set out €160 million release clause for giant midfielder Paul Pogba. Real Madrid head coach Zinedine Zidane became very keen to sign the Frenchman in his side and if the move occurred on the season, it Real will  break their all past transfer record since inception.

Report says that Zidane has been observing the Juve’s midfielder and offered him to join Old Lady side. To make sure for the fact he tried to convince him (Pogba) for summer transfer. 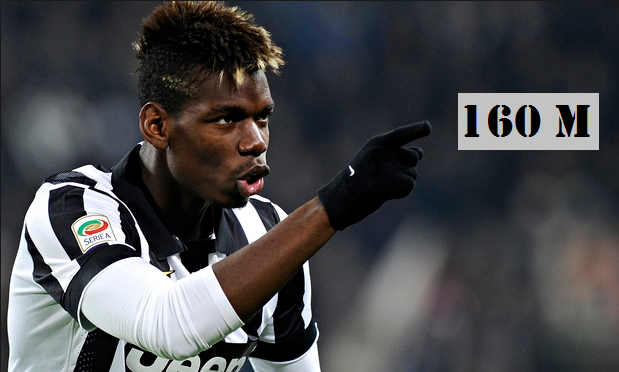 In 2012 Paul joined Juve Club by signing a four year contract deal and this summer the deal going to complete. The real consisted some phenomenal midfielder in the side as well as Toni Kroos, Luka Modric and Casemiro. But Zidane believes that the join of Pogba would give the team a solid starting of trio strength midfielder.

He mentioned that Pogba has a own gaming style which is definitely unique and different to all. And this quality will take the whites in a high standard level.

Pogba yet not sounded about the move and keep silent himself. The 23 years really a hard working midfielder. He is also a fast runner who have the quality to run with ball very fast. For his outstanding performances he was renowned UEFA Euro team of the year in last season. He is the man who boost Juventus to approach in the UEFA Euro Championship final event. Likely it is the main cause why Zidane so desperate to sign the midfielder.

But the twist is that the Real President Florentino Perez and general director Jose Angel Sanchez aware to Zidane about the puzzle of the move. The transfer clause which is demanded by the Juventus Football Club for the Frenchman is too expensive and they scared if the transfer brought loss for the club so far.

As all of us know about the Real Madrid club become the most rich football club in the world and it always spent a huge amount of money when they needed it. The club already expenses an immense of money for the star player like Cristiano Ronaldo, James Rodriguez, Karim Benzema and also some more others. Now it is difficult to decide the club authority what should do or not. Though the head coach desperate to take Pogba in the side, even he also aware himself to take the decision.  So guys, let’s see what happen. To get update keep eyeing in our site.