Juventus the most successful club in the Italian football’s history, are looking for their 33rd Serie-A title which will also be their 6th consecutive league title. But their waiting is yet to finished as they lost their chance to seal it early on the Sunday night. The Bianconeris toured the Stadio Olimpico at Rome on the Sunday night, looking to seal the league title at their rival’s home. But considering the very crucial UEFA Champions League final ahead, Juventus manager Massimliano Allegri rested some of his key players and made a few changes in the playing XI.

The likes of super star forward Paulo Dybala and Brazilian full back Dani Alves didn’t start. Gabon Midfielder Mario Lemina who started on this occasion, got his very first goal of the season which gave the visitors an early first half lead on the 21st minute. In form Argentine super star Gonzalo Higuain provided the assist of the goal. Roma didn’t take too much time to hit back as Daniele De Rossi levels just 4 minutes later with his 4th netting of the campaign and the opening half ended 1-1. 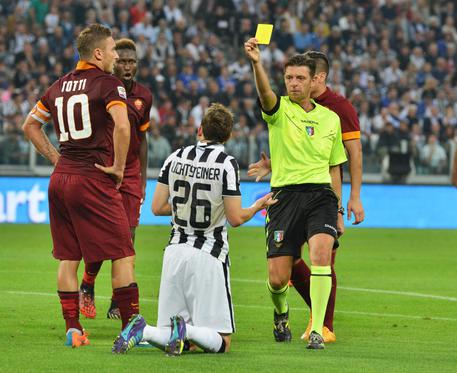 Italian sensation Stephan El Shaarawy scored the most vital goal of the game as he netted on the 56th minute to give the home side a crucial lead. The 24 years old continues his good run of form and has already scored 10 goals this season. Belgian midfield warrior Radja Nainggolan who assisted for the 2nd goal of his team, scored himself on the 65th minute to take his team into a comfortable position in the game and the hosts were completely in the driving seat. Alves came in the pitch, on the 64th minute replacing Switzerland international Lichtsteiner and Paulo Dybala finally comes on the 69th minute who replaced Sturaro but failed to score. As no more goals were scored in the game, the hosts sealed a 3-1 victory against a high flying Juventus side.

The Zebras just need 3 more points to secure the title and they still have 2 matches in hand. So they are very much controlling their own fortune. They are also on the edge of winning another big trophy. They will take on Spanish giants Real Madrid in the final at the Cardiff. Juventus will face Crotone at the home in their very next league game and will visit Bologna in the latest game of the season. They will also play Lazio in the Coppa Italia final and can win the historical treble this season.