Lazio has kept their winning run of form going as they have beaten Torino by 3-1 margin to secure their 4th victory on the trot. Now the Biancocelestis are unbeaten in their last 6 league games. The last time they tasted a defeat in the top tier competition of Italian football was back in January. They haven’t faced any downfall in the Serie-A in the February and March so far since the narrowest margin’s home defeat against Chievo Verona.

The high flying Le Aquiles hosted the Torino side in an important league clash at the Stadio Olimpico on the Monday night. Gli Aquilottis were at their top of their form and considering the home advantage, a victory for the hosts was very much expected. The Toros were searching for their form but wasn’t consistent since the last 2 or 3 months and probably that’s why after having a win against Palermo in their latest match, they have been handed their second defeat in their last 5 league matches. 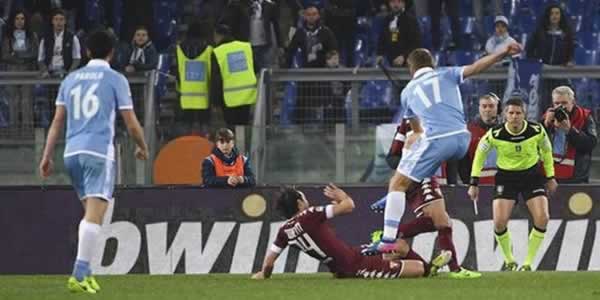 The first half ended as goalless as no team could break the dead lock in that opening period. It took no less than 56 minutes to break the dead lock as Lazio’s Italian superstar Ciro Immobile opened the scoring to give the home side the crucial lead. It was the 19th goal of the season for the 27 years old attacker and he just can’t forget this goal as he scored it against his former club. Argentine forward Maximiliano Lopez levelled the line for Torino on the 72nd minute with his 3rd netting of the season. The 32 years old had scored on 6 occasions last season and Juan Iturbe provided the assist of that equalizer.

The match was heading towards a draw but suddenly Senegal striker Keita Balde scored the most crucial goal of the game with just 3 minutes of normal time remaining on the referee’s clock. It was the 7th strike of the campaign for the striker who has just turned 22 just a week ago. But that was not the final goal of the game as Brazilian young sensation Felipe Anderson sealed the game for his side during the closing minutes of the match.

Lazio has moved again to the 4th place with this victory as they’ve gained 56 points so far from their first 28 Serie-A games. The Granatas are currently at the 10th position with 39 points beside their name. Juventus are topping the ladder with 70 points and are marching towards another league title.