Barcelona wanted to sign a center-forward for the team and their target is Deportivo la Coruna star Lucas Perez and the Sevilla hitman Kevin Gameiro. Barca already stepped out their search key for the summer with two top names in the squad. So, Kevin Gameiro along with Lucas Perez are in the short list of barca transfer windows this season.

Actually the fact is that Barca searching those kind of forward who have the ability of covering the penury of any trident as well as Lionel Messi, Neymar and Luis Suarez. Perhaps Lionel Messi along with Neymar and Luis Suarez going to miss the Club World Cup schedule in Japan ahead of the month. In that situation someone need for the team to make up the gap of the trio strength. 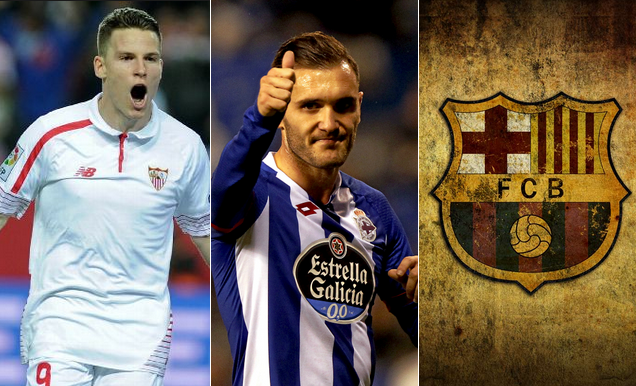 Robert Fernandez the sporting director of Barca  along with the assistant Urbano Ortega looking for a capable player who can able to play anywhere in any frontline. They searching for those quality who easily mixed with the team and play the same style as Barcelona plays. They wanted to colored them with the Barca’s colour Though the process is too difficult to choose alternative of the three exoteric striker but they must finish the work as soon as possible.

Luis Enrique needs a forward who can cover the gap three dynamic football legend. The frence forward Kevin Gameiro has emerged is the blossomed of Seville who becomes the professional forward of the team. The French international longed to cost about €20 million which considers as one of the important deal for the club.

The 28 years man is very talent and dangerous for the penalty area whose fast and hard stroke really perilous for the goal bar. His predatory driving sort is completely mindblowing and effortless.

The main fact is that the France international can be proved much costly which can’t afford by the team Barca. It is learnt to the source the club Barca set to pick one more forward from spain. According to the source at present Barcelona faces monetary problem that’s why they ready to sell the brilliant striker like Neymar. In that condition it can be big decision to elect new soccer in the team.

Perez is a very talented footballer who began the career campaign in a brilliant way. Though his brilliant efficient of performing goal dried but his notable performance with seven match seven goal was really excellent and still remember to all. For his brilliant success and eye catching playing style, he snatch Barca’s attraction on his side.

One side the club Barcelona are searching the certain forward for the club on the other side they also looking for a central defender by costing a big amount for upcoming summer. They wanted to require the PSG (Paris Saint-Germain) defender for the post.

Barcelona going to make their buyback of €3 million clause to fetch back Suarez to Nou Camp. It’s also learnt by the source Neymar will remain in the team and soon he will be re-signed with a new contract. But the news yet not announced or published in the officially. So guys connected with us to get hot and latest news.